Serious miscalculations by the empty suit GOP presidential field has left Donald Trump way out front, all alone, just the way he wants it

I’m thinking Donald Trump either has better pollsters than the establishment GOP empty suits who have been attacking him, or he simply doesn’t give a doodly what they think. Actually, I’m pretty sure it is both, but much more the latter than the former.

Miscalculators Perry and Rubio have been silent since their first opportunistic attacks on The Donald, for the obvious reason that it only resulted in doubling Trump’s poll numbers, leaving them in the dust. Serious miscalculation. They should have had the common sense, if not poll results, to see that the conservative base, and even many independents, and I dare say, a few Democrats too, are flocking to the first candidate since Reagan to speak openly, honestly, with no hedging, no finger-in-the-wind, poll driven babble that is served up every time an empty suit steps up to a microphone. By empty suit I mean most of the Republican field of presidential hopefuls, all hoping to be the beneficiary of fortunate timing, laying out their blah-blah non-agenda for the voters to snore at. Conservatives are sick of the same blah-blah platitudes coming from empty suit say-nothings.

To say that Donald Trump’s honesty, courage, complete rejection of political correctness, and direct language, filled with the concrete things conservatives are dying to hear their leaders say, is that which the voters are starving for, would be a gross understatement. The smartest thing the empty suits can do right now is apologize to The Donald for their attacks on him and line up for Trump lessons in politics, or rather how to not be a politician. Real life apprentices.

The Donald just keeps Trumping along, no real cares, just the truth, the facts (like Lindsey Graham’s cell phone number), many chuckle-provoking one-liners along the way, and the rest of the field appears to be invisible, just as if The Donald had drawn it up on paper. These guys should learn that you don’t fight with a born fighter who is twenty times more badass than you. McCain learned the hard way, there are some people you just do not cross. Now that The Donald has maneuvered McCain into a position where the spotlight is shining brightly on McCain’s own incredibly poor (the kindest word I can think of) record, I’m sure McCain is regretting dissing Trump and his “crazies.”

Just a few days ago, before a crowd in South Carolina, Trump addressed Rick Perry’s recent condemnation of The Donald: “He put glasses on so people will think he’s smart. It just doesn’t work! People can see through the glasses.”

So, go ahead, wet-behind-the-ears Republicans, take your shot at The Donald. I will be watching the fun. You may as well challenge a Navy SEAL to a push-up contest. When I was in Airborne School I was amazed at the SEALs in my class, who when directed by the black hats (cadre) to do push-ups, they could do virtually unlimited push-ups. There may be a SEAL on Fort Benning right now who began doing push-ups in the 80s. 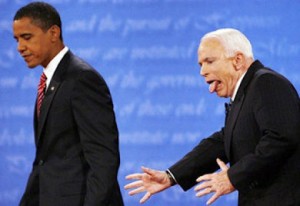 Donald Trump is defying “conventional belief” by doubling down and refusing to apologize to Sen. John McCain for comments made over the weekend that at first questioned the senator’s reputation as a war hero before saying that he is one, talk show host Rush Limbaugh said Monday.

“The American people haven’t seen something like this in a long time,” Limbaugh said on his radio program. “They have not seen an embattled public figure stand up, double down, and tell everyone to go to hell.”

Limbaugh insisted that he is not a Trump apologist, but said the media and politicians are following a typical trail they use when they want to get rid of a public figure, and the talk show host said a similar pattern is often followed on his own controversial statements.

“Under conventional belief, a public figure makes a politically incorrect statement that offends somebody,” said Limbaugh. “The Washington establishment and media react in outrage, and the media replays the offensive comment over and over and over.”

Eventually, the establishment “gets together with the media” and all demand the public figure apologize, beg forgiveness, and withdraw from public life and “stay in chagrined irrelevance,” said Limbaugh.

“This charade plays whenever this circumstance happens,” said Limbaugh, and there is one fatal mistake made, when it is assumed that “the collective outrage of the Washington establishment and the media is reflective of the American people.”

He noted that journalist Sharyl Attkisson wrote a “great analysis” of the Saturday incident.

“It is a fact that Trump did not say what he is being reputed to say,” said Limbaugh, that “McCain’s not a hero, and so forth. Four different times, he said McCain is a war hero.”

“Facts don’t matter in a circumstance like this,” Limbaugh said, but instead, statements are “purposely blurred, lied about or ignored, much like my ill fated commentary on ESPN. Take something that wasn’t said and blow it out of proportion.”

He also pointed out that Trump said what he did “following McCain’s insult of Trump’s supporters, calling them ‘crazies.’ This ticked Trump off, [because] he doesn’t want to think they’re a bunch of crazed wackos.”

But nobody is suggesting McCain apologize, but the media and Washington’s establishment are all demanding apologies and saying that Trump’s campaign can’t survive, as is the usual pattern, said Limbaugh.

“Except one thing hasn’t happened: Trump hasn’t apologized,” said Limbaugh. “Not only he hasn’t, but he doubled down and added to his original criticism.”

And the “architects” of the scandal “don’t know what to do…the guilty party is begging for forgiveness but Trump has not,” he said.

Meanwhile, the outraged reaction takes for granted that the American public will find Trump’s words “unpalatable, unforgivable, and unacceptable,” said Limbaugh, because the assumption is that media is reflecting public opinion.

But Limbaugh said that didn’t happen in his own case and he doesn’t think it will happen with Trump either, as the assumption that everybody is outraged “is always erroneous.”

“They’re doing everything they can to destroy Trump by acting like he’s destroying himself with voters,” said Limbaugh. “That’s what presumes this new political reality, but I don’t think that’s the case.”

He noted that polls will likely come out that will show if Trump was damaged by his words, but the Republicans don’t want to be seen as mean people.

“The conventional wisdom is…everybody is outraged the fact that he doesn’t have a lot of public humility, that he’s a mean guy,” said Limbaugh. Meanwhile, McCain has “called tea party people hobbits, crazies.”