Outstanding article from World Net Daily on Donald Trump: “Simply unstoppable. He may carry all 50 states.”

While the Republicans are tripping over each to see who can deliver the most caustic invective towards Donald Trump, he is cruising. The Teflon Don sheds criticism and insults without a care, and the more they attack him, the more popular he becomes, and the more their own poll numbers tank.

The big question remaining is when will the establishment Republicans get the message: “Trump is here to stay! He is people’s choice!” Notwithstanding GOP efforts to discredit him, demoralize him, and destroy him, The Donald keeps trucking along, publishing a wildly popular immigration plan one day, giving kids a ride on his multi-million dollar Sikorsky helicopter the next.

The amazing part of this story is how stupid the Republican leadership is. Rather than backing their charismatic, hugely popular frontrunner, and enjoying the ride all the way to the White House, they are engineering one obstacle after another to diminish his consistently strong poll numbers, and replace him with a RINO. They simply don’t get it! Donald Trump is the people’s choice, and I don’t see that changing. 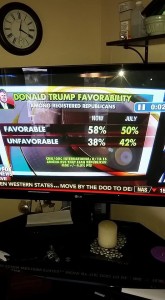 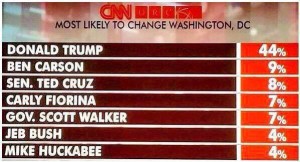 Admit it. Donald Trump is a volcano in a forest of Ronson lighters.

You’re not going to stop him. He may carry all 50 states.

The awareness of Trump’s invincibility is dawning slowly for several reasons. Nobody wants to be revealed as a fool if Trump flames out. Also, such a breathtaking prediction hates to be borne all alone. “Out on a limb” is a lonely place for a pundit to be. Then, too, a lot of heretofore wise observers are obeying the instinct to adopt a “business as usual” stance. We put subconscious pressure on ourselves so that yesterday’s “clown-by-consensus” isn’t too abruptly hailed as the winner this absurdly long before the first vote is cast. The dreamers in the GOP are still reassuring one another that Trump’s domination is a “summertime thing,” and that come fall the public anger will be gone and the people will ask themselves, “Is this the kind of person we want in the Oval Office?” Dream on, Dear Establishment. People are already asking that question, and the answer is not just “Yes”; it’s “Hell, Yes!”

Eight years ago Americans decided to take a chance on a “community organizer” without one single discernable accomplishment, not even authorship of his own book! (Thank you, Jack Cashill!) Obama was president of the Harvard Law Review – and never wrote a single editorial. And we elected and re-elected him.

Like the reporting you see here? Sign up for free news alerts from WND.com, America’s independent news network.

And now we’re taking the measure of a billionaire 11 times over who’s boldly carved his signature in stone and steel and golf-course green around the world, written best-selling books and produced and starred in dazzlingly high-rated TV shows, and you’re trying to tell me this world-class accomplishmentarian is a summertime thing set to evaporate with the first fall chill? In a pig’s eye! Even his worst enemies agree that Donald Trump gets things done. Meanwhile, your community organizer is now a political kidney stone that will take 17 more months to pass. You don’t like Trump’s rhetoric, maybe? What’swrong with “I love this country and I want to make it great again”?

Donald Trump has ruptured every rule of nature and human nature, science and political science, and continues to sneer at the Law of Gravity itself as he personally and deliberately pushes every down-button while his elevator nonetheless continues up, up and up.

Sen. John McCain satisfies most people’s definition of a war hero. Here comes Trump mocking McCain as being a “war hero only because he was captured.” Some of those “wise observers” declared Trump doomed even at that early point. And what happened? Trump gained!

Doesn’t our culture forbid us to hit a woman? Meet Fox’s rapturous Megyn Kelly, whose very appearance sets the syrups of the soul all a-sizzle even before her formidable IQ approaches the scale for a weigh-in. Kelly ticked off a litany of horrendous things Trump has uttered to denigrate women. Trump struck back hard. And what happened? Trump gained.

Aren’t we supposed to tire quickly in the presence of a braggart? Trump plunges with gusto and abandon into firestorms of self-praise, citing his fabulous fortune, huge achievements, the hordes of people who love him and his admittedly impressive record for “getting things done”! Trump unloads like a sportscaster whose son just scored the game-winning touchdown in the Super Bowl, as he shares the news that there was just a poll in Nevada, and “I came in first among Hispanics!” Aren’t candidates supposed to use subtle comments to smuggle across feelings likely to win them votes? Trump puts it all out on the front porch where the goats can get it. “And I’m going to take care of our warriors, whom I love! I love our wounded warriors!” Again, Trump gained.

If the anti-Trump rap weren’t so pitiful I’d be much angrier. Forever we’ve longed for a leader who didn’t have to mortgage himself out to fat-cats, a leader free to appoint the best people and not the best donors. Now we’ve got him.

During the Civil War a group of less successful generals complained to Lincoln that Gen. Grant was an alcoholic.

“Find out what he likes,” snapped Abe. “And send him another case.”