I was thrilled and proud when I heard that President Trump had donated his 2017 offshore profits to the US Treasury. I searched for information on the donation and was unable to find anything except the same old media slamfest for anything President Trump does.

The usual ingrates came out in droves to bash the president for giving his money away to We the People. I was unable to find a single source that showed the least bit of gratitude for this gesture.

Giving away his family’s money is not something President Trump had to do. He did it to prove that there was no conflict of interest. His children are managing the properties and that money is rightfully theirs. I believe any sane judge would see it that way.

So, not only is President Trump giving away his salary to charity, he is now donating all of his companies’ offshore profits to pay down the national debt. And all we hear are insults.

I believe it is We the People who owe President Trump for the business he has lost as a result of serving as President (pic, below). 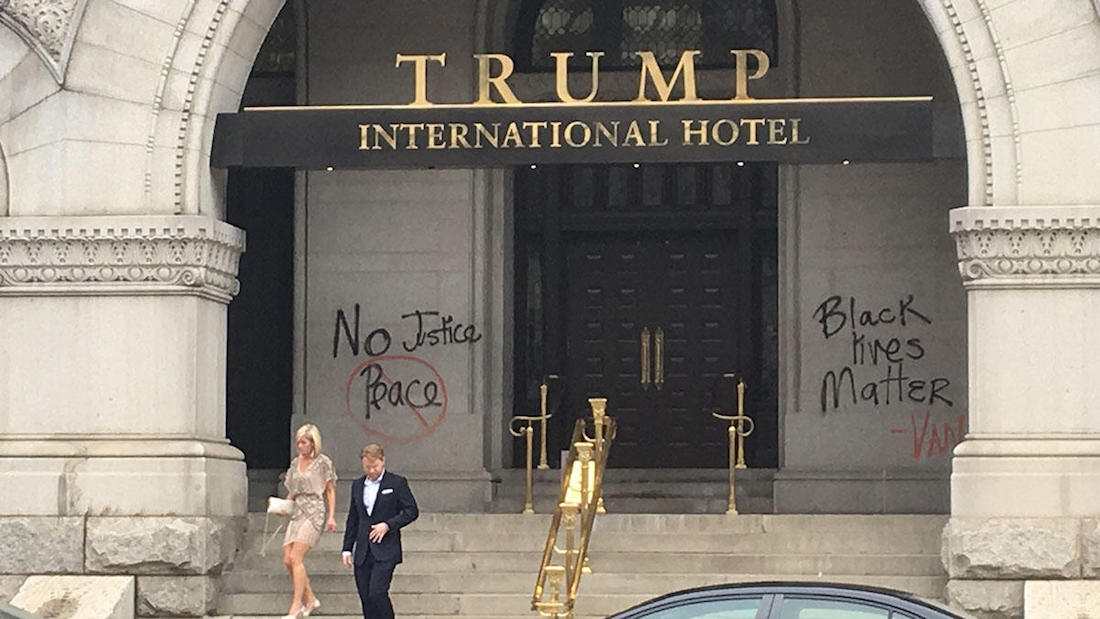 Fox Business was among the least offensive sources I found on the donation, but even their report is critical, if not openly malicious….

The Trump Organization said Monday it has made good on the president’s promise to donate profits from foreign government spending at its hotels to the U.S. Treasury, but neither the company nor the government disclosed the amount or how it was calculated.

Watchdog groups seized on the lack of detail as another example of the secrecy surrounding President Donald Trump’s pledges to separate his administration from his business empire.

“There is no independent oversight or accountability. We’re being asked to take their word for it,” said Noah Bookbinder, executive director of Citizens for Responsibility and Ethics in Washington. “Most importantly, even if they had given every dime they made from foreign governments to the Treasury, the taking of those payments would still be a problem under the Constitution.”

Trump Organization Executive Vice President and Chief Compliance Counsel George Sorial said in a statement to The Associated Press that the donation was made on Feb. 22 and includes profits from Jan. 20 through Dec. 31, 2017. The company declined to provide a sum or breakdown of the amounts by country.

Sorial said the profits were calculated using “our policy and the Uniform System of Accounts for the Lodging Industry” but did not elaborate. The U.S. Treasury did not respond to repeated requests for comment.

Watchdog group Public Citizen questioned the spirit of the pledge in a letter to the Trump Organization earlier this month since the methodology used for donations would seemingly not require any donation from unprofitable properties receiving foreign government revenue.

Robert Weissman, president of Public Citizen, said that the lack of disclosure was unsurprising given that the Trump’s family businesses have “a penchant for secrecy and a readiness to violate their promises.”

“Did they pay with Monopoly money? If the Trump Organization won’t say how much they paid, let alone how they calculated it at each property, why in the world should we believe they actually have delivered on their promise?” Weissman said.

Ethics experts had already found problems with the pledge Trump made at a news conference held days before his inauguration because it didn’t include all his properties, such as his resorts, and left it up to Trump to define “profit.” The pledge was supposedly made to ameliorate the worry that Trump was violating the Constitution’s emoluments clause, which bans the president’s acceptance of foreign gifts and money without Congress’ permission.

Several lawsuits have challenged Trump’s ties to his business ventures and his refusal to divest from them. The suits allege that foreign governments’ use of Trump’s hotels and other properties violates the emoluments clause.

Trump’s attorneys have challenged the premise that a hotel room is an “emolument” but announced the pledge to “do more than what the Constitution requires” by donating foreign profits at the news conference. Later, questions emerged about exactly what this would entail.

An eight-page pamphlet provided by the Trump Organization to the House Oversight Committee in May said that the company planned to send the Treasury only profits obviously tied to foreign governments, and not ask guests questions about the source of their money because that would “impede upon personal privacy and diminish the guest experience of our brand.”

“It’s bad that Trump won’t divest himself and establish a truly blind trust, and it’s worse that he won’t be transparent,” said Rep. Elijah Cummings, D-Maryland, ranking member on the House Oversight Committee. He called the Republicans refusal to do oversight, such as subpoena documents, that would shed light on Trump’s conflicts of interest “unconscionable.”