Cruzbots may want to secure a box of Kleenex before reading this. Donald Trump is cruzing in Iowa, skyrocketing to an 11-point lead

Donald Trump has taken a double-digit lead in Iowa with only a week to go before the Iowa caucus, according to the most recent Fox News poll.

From what was a neck-and-neck race a week ago, Trump is dominating once again leading 34% to Cruz’s 23%, a miraculous turnaround. Cruz is losing New Hampshire even worse, down seventeen points to Trump, who is cruzing at 31% compared to Cruz’s 14%. 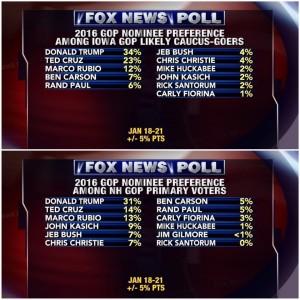 With just a week to go until Iowa conducts it’s caucus, voters have swung into the “Trump Tent” rapidly, as evangelics have switched decisively to Trump.

According to the new Fox Polls, Trump is +11% in Iowa, confirming the trend reported by Zogby and CNN.

A lot has happened in the intervening two weeks.  Fox Business Network hosted a Republican debate where Trump questioned Cruz’s eligibility to be president, and Cruz attacked Trump’s liberal “New York values.”  On Tuesday, Gov. Terry Branstad urged his fellow Iowans to vote against Cruz because of his opposition to ethanol — and former Vice-Presidential candidate Sarah Palin endorsed Trump.

Republican pollster Daron Shaw says, “We tend to over-interpret every little thing in a presidential race, but here we actually have solid evidence Trump didn’t just win last week in Iowa — he won it by enough to put some distance between himself and Cruz.”  Shaw conducts the Fox News Poll with Democratic pollster Chris Anderson.