VIDEO: The Donald vows to cancel the Paris Climate Agreement, which gave the UN the power to restrict America’s energy usage

Call it the Trump Climate Unagreement.

Donald Trump is vowing to cancel the Paris Climate Agreement, agreed to last December by Barack Hussein, giving big money to the United Nations along with the authority to tell We the People of the United States how much of our own energy resources we can use.

Engineered by self-proclaimed geniuses like climate hustler Al Jazeera Gore, it is nothing more than a scheme to exploit the stupid and treehuggers (pardon my redundancy), giving them a feel-good moment, while they shove the real goal, an income redistribution program, down our throats. 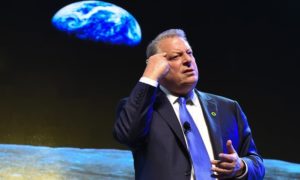 Photo, above: Al Gore gives a climate change lecture in Manila. ‘There is an overwhelming amount of hope that the Paris climate agreement could be a turning point…’’ he said. Photograph: NurPhoto/REX/Shutterstock

We the People, right now, are paying the UN to restrict our own energy use, to punish us. We are paying them to do it! We are broke and Barack Hussein is paying people to beat us up.

Giving money to “developing countries” so that they can become more energy efficient is a joke! You give money to East Turdistan and they are not going to use it for its intended purpose. In fact, the people of East Turdistan will likely never see a penny of that money. But their president and his cronies will be partying down. You can be assured of that.