VIDEO: Donald Trump got a standing O when he arrived at a NYC restaurant for dinner, except from the press, who were bitter and pouting.

Donald Trump wanted a private dinner with his family, so they chose the 21 Club, a Manhattan restaurant. Trump didn’t bother to invite the press because, as stated, it was a private dinner, a night on the town with his family. It wasn’t a photo op with a foreign head of state or the signing of some important legislation. Just The Donald and his family enjoying a night out for dinner.

When fellow diners saw that it was Donald Trump entering the restaurant they stood and cheered (Twitter video, below). Trump cheerfully thanked them all and shook their hands.

The usual suspects in the press are indignant! How dare The Donald not include them in his dinner plans. That bastard! LOL! I have never seen such pouty wimps as we have in our mainstream media, who believe they now own Donald Trump. Apparently they have learned nothing in the past year and a half. NO ONE owns Donald Trump. He answers only to God and We the People, exactly the way it is supposed to be. Such a welcome change at POTUS.

So-called political reporter Jenna Johnson whined about the horrible treatment she received from Donald Trump, which she explains in the text below the following Tweet. “Our view of the restaurant is blocked by a dumpster.” Symbolism so thick you can cut it with a knife.

Want some cheese with that whine? 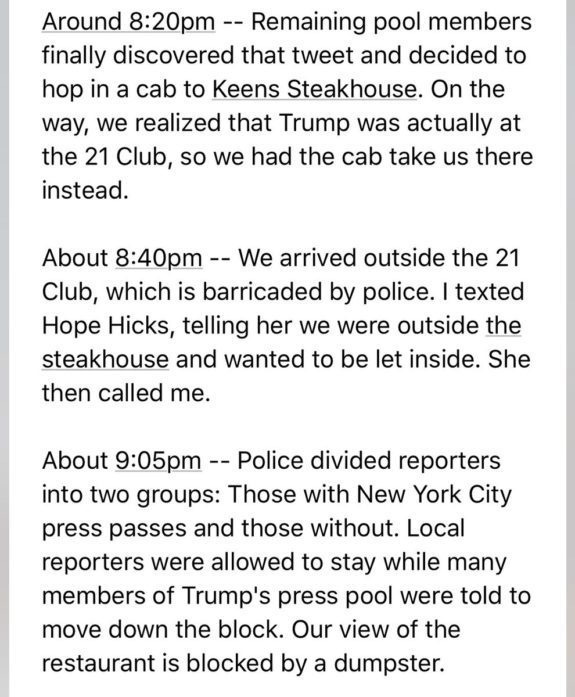 Given the treatment most of you in the press have given Prez-elect, I would ditch you for 8 years! "Public's representative." GMAFB!