BOOM! President Trump’s approval rating is 4% higher than Barack Hussein’s at the same point in his presidency

In the beginning, the only friend Donald Trump had was We the People. He has picked up a good bit of support from Republicans in Congress, but still, his best friend is We the People.

President Trump’s enemies are many. The Democrats hate him, the mainstream media hates him, pollsters hate him, Rinos hate him, and they all will and do lie to make him look like a hapless loser. Yet, We the People know better and are as undeterred as our president is. We love the guy, and that undeniable picture is becoming clearer as we move into Year Two of his presidency.

Despite the mainstream media and a $40 million war chest David Brock’s network is using to wage a propaganda war against President Trump, the latest Rasmussen daily tracking poll reveals Trump’s approval rating to be 48% – four percent higher than President Obama’s rating at the same point in his presidency, according to Zero Hedge. 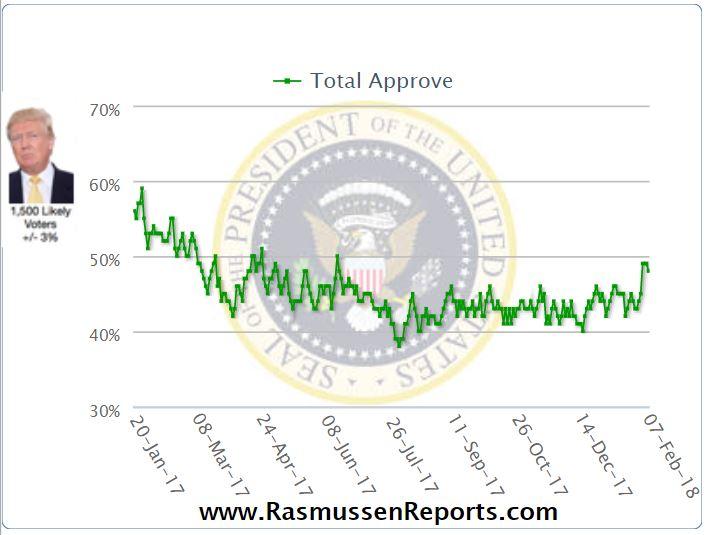 The latest figures include 34% who Strongly Approve of the way the president is performing and 42% who Strongly Disapprove. This gives him a Presidential Approval Index rating of -8. 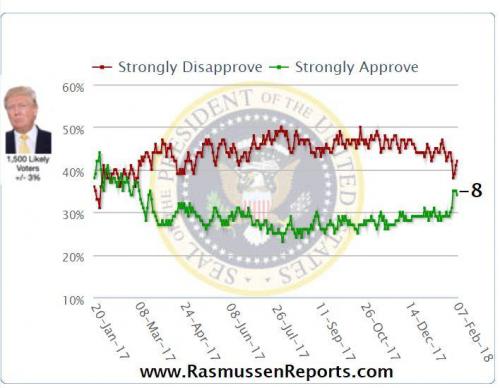 President Obama’s approval rating on February 7, 2010 was 44%, while 56% of likely voters disapproved.

Given Obama’s 44% approval / 56% disapproval compared to Trump’s 48% / 51% rating, one has to wonder what his rating would be without the full-court-press of hate by the MSM, FBI, DOJ, the Clinton network including David Brock, John McCain, Fusion GPS, Lisa Bloom, Silicon Valley, Snopes, and Ruth Bader Ginsburg.