Why did Fox News conduct such a shameless attack on Donald Trump. This may be the answer. Guess who one of Hillary’s top donors is?

If you are among those searching for answers to Fox News’ shameless attack on Donald Trump during the first GOP presidential debate, the list of Clinton family contributors, below, very likely has something, probably a lot, to do with it.

Among the Clinton family’s generous, multi-million dollar contributors was none other than Fox News, ninth on the list of greatest contributors, at a cool $3 million.

Donald Trump is a very serious threat to the status quo in Washington, the broken state of our bloated government, and the good old boys clubs in both of the stale, obsolete parties that outlived their usefulness decades ago, which is even more reason that We the People NEED Donald Trump to reform this mess and return prosperity and respect to the United States. 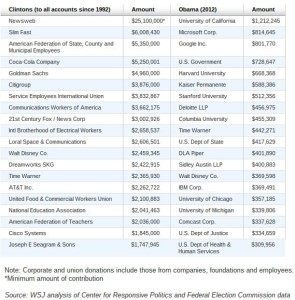