Global imperialist and world-class stupid bitch Hitlery Clinton vows to take down Assad and Syria if elected, as if Iraq and Libya weren’t lesson enough? 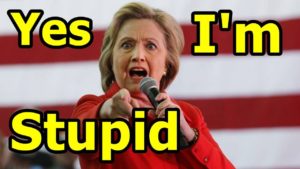 Hitlery’s newest campaign pitch to the anti-imperialist bloc is to take over Syria, oust Assad in favor of God knows what, probably foaming-at-the-mouth Islamic nutjobs.

So, the imperialist anti-imperialism candidate is promoting imperialism to remedy the world of what ails it, imperialism. And the crowd went wild!

(ANTIWAR) According to Democratic presidential nominee Hillary Clinton’s foreign policy adviser, she would order a “full reeview” of the Syrian war as her first task upon taking office, with an eye toward a “reset” of the conflict to shift focus toward attacking the Assad government and imposing regime change.

Clinton’s aide, former Pentagon chief of staff Jeremy Bash, insisted that Assad’s was a “murderous regime” and that US foreign policy would be to escalate both the war against ISIS and this new war against Assad to get both “out of there” at the same time.

Syria has been the subject of a lot of debate in the Obama Administration, with the Pentagon seeking a focus on ISIS, the CIA wanting to shift entirely to fighting Assad, and Secretary of State John Kerry negotiating a deal with Russia to expand the war to include al-Qaeda’s Nusra Front.

Though Bash didn’t cover where the Nusra Front would fit into this, the suggestion that Clinton’s administration would escalate attacks on both seems designed to split the difference and placate hawks on both sides of the issue. The Obama Administration has already been steadily escalating the war since it began, to little effect, and Clinton’s policy would be that, just moreso.