The fallacy of statism: Police stoppage in NY. Has chaos and anarchy ensued? No! People are getting along famously

Oops! Big Brother left the window open and a huge gush of clean, fresh air is overwhelming the people with a delightful sense of peace and cooperation.

Sure, it is now more likely that a bold, late-for-work citizen will cheat a little extra on that yellow light, then proceed if all is safe, and stop if it isn’t. Compared to pre-stoppage Orwellia, where such a blatant disregard for the law may result in a nightmare of flashing blue lights, imperious demands to produce your papers and produce them quickly, and the growing fear as you rifle through your glove compartment that your failure to find your insurance card may result in a physical assault, a trip downtown, or at least your sobriety being questioned. In your head you are frantically reciting the alphabet backwards in dreadful anticipation.

Yep, life in New York City is proceeding at a peaceful and joyous holiday pace. Maybe Bill de Blasio deserves a medal for trashing the cops, who took offense, dissing him back, and in the most puerile “na-na-na-na-na” fashion, have just about completely stopped issuing citations, arresting citizens, clobbering suspects, and are largely enjoying the holidays with the rest of us. Go, Buckeyes!

One thing is certain, this New York City police stoppage, this hopeful window on the soul of society, be it never-ending, is clear evidence, proof even, that America has been swimming in a sea of authoritarian dominance. 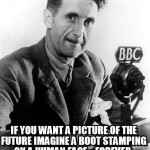 So, where’s all the chaos and the murder and the children smoking meth?

We are constantly reminded by State institutions, from lecture halls to mainstream “news” organizations, that if it weren’t for the police out there arresting everybody, society would break down immediately.

Oh there will be the motorcycle gangs with flamethrowers invading supermarkets, the wild-eyed adolescents disobeying teachers and leaving school, the religious conservatives forming new dictatorships, the horde of unwashed illegal immigrants urinating on our golf courses, the rabid murder parties and fornication spilling onto the streets, zoo animals escaping and mauling the children — the end of human civilization.

Well, there has finally been a “virtual stoppage” of police activity in New York, and the people there are… reading blogs, working, buying groceries, watching netflix, waiting in lines, saying hi to strangers, checking facebook. Same as usual. It looks like they haven’t murdered each other yet.

Of course they haven’t.

Do you want to know what would really happen if the police state ended? What would happen if, say, tomorrow, the war on drugs ended?

About 80% of all the State functionaries from police and prison guards and prosecutors to court clerks and judges and school resource officers would have to find real jobs that people voluntarily pay them to do, since there would be no more need for them to enforce a corrupt war on drugs and generate revenue for the State.

The owners of State-sponsored for-profit prisons would become bankrupt. About four million non-violent peaceful Americans — formerly called “criminals” for smoking a harmless plant — would be let out of steel cages and reunited with their loved ones.

The few officers that were left would be forced to respond to real violent crimes instead of, say, issuing revenue-generating tickets for incomplete stops, raiding people’s homes, shooting dogs, throwing people in cages for smoking a plant, or killing people for selling untaxed cigarettes.

RELATED: The Reason There is No Such Thing as a “Good Cop”: an Otherwise Normal Societal Need for Protection Becomes Inherently Corrupt When Government Monopolizes It

The New York Post has released a study showing that NYPD tickets and arrests for minor offenses — non-violent offenses — have dropped by a whopping 94%.

The drop coincides with the police union issuing instructions to the NYPD to stop arresting people unless it is absolutely necessary.

This was done under the guise of “increasing officer safety” after two NYPD officers were executed.

In reality, it is a de facto strike. The NYPD is mad at the mayor and other government bureaucrats, blaming the latter for the fact that the two officers were executed. By refusing to issue traffic tickets, by refusing to lock more people in cages for victimless crimes, the police are in effect starving the government of revenue.

Angry [police] union leaders have ordered drastic measures for their members since the Dec. 20 assassination of two NYPD cops in a patrol car, including that two units respond to every call.

It has helped contribute to a nose dive in low-level policing, with overall arrests down 66 percent for the week starting Dec. 22 compared with the same period in 2013, stats show.

Summonses for low-level offenses like public drinking and urination also plunged 94 percent — from 4,831 to 300.

Drug arrests by cops assigned to the NYPD’s Organized Crime Control Bureau — which are part of the overall number — dropped by 84 percent, from 382 to 63….

The Post obtained the numbers hours after revealing that cops were turning a blind eye to some minor crimes and making arrests only “when they have to” since the execution-style shootings of Officers Rafael Ramos and Wenjian Liu.

Friends, this is partly good news. Let’s hope those numbers get all the way to 100%.

We can go about our lives and bring in 2015 with an epic celebration. (Assuming, of course, the agents of the police state don’t stage some kind of false flag disaster to gain relevance as our “protectors” again.)

The de facto police strike unwittingly illustrates the true role of police: to empower, protect, and generate revenue for the State while keeping the people demoralized, scared, or poor. Because of the strike, we are now witnessing the reverse — more freedom for people, and less power for the State.

Consider how much money Americans are saving just during this short period of non-policing. Suppose that 24,000 parking and traffic tickets had been issued, like they were in this same period in 2013, and suppose they were only $50 each (they are much more, but let’s be conservative). That’s over a million dollars saved by Americans. For many, that could mean the difference between paying for rent and dinner vs stressing out about financial problems.

Consider all the families that haven’t been separated. There would have been around 400 drug arrests during this period last year. With only about 60 arrests since the de facto strike, that’s thousands of family members who wouldn’t be separated as their fathers, mothers, or kids are thrown in jail or felonized and forced into unemployment.

If the NYPD were to continue this non-policing month after month, it would mean millions of jobs saved, millions of families not destroyed, and billions of dollars saved by Americans.

If New York City is any indication, we would be better off without this institution.

Watch the video below and learn why Police Statism is the ultimate threat to a well ordered society.