It is critical that We the People stop Hitlery by voting for Donald Trump. The nasty b!tch is just plain scary! 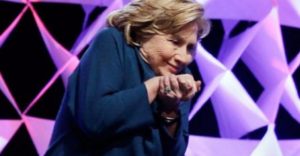 Three words…. “Klayman nails it!” I agree with every word he said, and have said the same words many times.

As of today, so-called Republican candidate for president Donald J. Trump is toast. He has effectively been “assassinated” not just by vile, leftist Democrats, who, like the Bolsheviks in the former Soviet Union, will tell any lie and commit any crime to justify their socialist if not communist (in the case of Bernie Sanders and Elizabeth Warren) quest, but also by establishment Republicans who want Trump defeated lest he upset and turn the spigot off of their Washington, D.C., money and power gravy train.

It’s not just Hillary Clinton and her comrades, the sleazy bottom-feeder likes of John Podesta, Harold Ickes, Cheryl Mills, Leon Panetta, James Carville (all of whom I deposed for their many scandals in the 1990s), but Republican slime balls like House Speaker Paul Ryan, Senate Majority Leader Mitch McConnell, Sen. John McCain, Sen. Ted Cruz, Gov. John Kasich, Republican National Committee Chairman Reince Priebus, former candidate for U.S. Senate Hewlett Packard Chairman Meg Whitman and a myriad of others in the GOP who want Trump to lose to to the Wicked Witch of the Left so they can run their own corrupt establishment candidate against her in 2020.

That Ms. Hillary is a hardcore criminal who thus far has escaped the “short arm” of the law is of little concern to these “treasonous traitors.” Their own self-interest is more important than fulfilling and maintaining the dream and creation of our Founding Fathers: a free republic of laws and not men, as John Adams put in when he advocated at Independence Hall in Philadelphia for a Declaration of Independence.

Not that the Donald is perfect. He sometimes does not phrase his thoughts in a “thoughtful way,” but he is not the devil like Obama; nor is he a racist as he has been painted not just by the Democrats but the establishment in his own party, most notably Ryan – who, with the hairy point at the top of his forehead, is a bizarre-looking childlike creature who appears and acts more like “Eddie Munster” than a serious leader of his party.

The recent flap over the Muslim family, Khizr and Ghazala Khan, who were put up to attack Trump mercilessly, Hussein Obama style, at the Democratic National Convention is just one case in point. Sure, we should all honor a fallen hero like their son. But Gold Star parents should not be used as props for political purposes. The canned and pre-written statements of Mr. Khan – calling out Trump as ignorant and claiming that he does not know what sacrifice means – were simply a cheap Muslim attack on Trump. Honoring his son, which would have been legitimate and admirable, should not entail personal attacks and raising issues of alleged racism because The Donald rightly wants to limit Muslim immigration during this time of war with Islam – and that is what it is plain and simple. Mr. Khan son’s was an American citizen and hero, and he deserved all the rights accorded to him by the Constitution. Trump has never advocated taking away these rights nor disparaged the valiant service of the Khan’s son. In fact, the Khans dishonored their son by using his sacrifice and heroism for their own cheap political and Islamic purposes.

Not coincidentally perhaps, it has been reported that Mr. Khan is an immigration lawyer in a law firm that also represents the Clinton Foundation. He has also written law review articles that extol the virtue of anti-constitutional Shariah law. Thus, when Mr. Khan held up the U.S. Constitution (which is antithetical to Shariah law) he was not just supporting Hillary Clinton – who has coddled Muslims and extorted money from terrorist states while serving as Obama’s secretary of state – he also was probably laughing all the way back to Mecca.

So when Trump reacted to the vicious partisan personal attack of Mr. Khan and his Muslim wife, sure he was not smart to take the bait. But it was understandable, given the personal and political nature of the attack. It was one thing that the Wicked Witch of the Left and her supportive leftist media seized on this, but quite another when establishment Republican so-called leaders like Ryan, McConnell and McCain used the occasion to finish The Donald off. They sanctimoniously praised the Khans as a Gold Star family, as if whatever they now say and do is untouchable. Regardless of the Khan son’s heroism, this does not give his parents a carte blanche to do and say whatever they want to further their own Shariah law-Muslim, Hillary Clinton and Democrat agendas.

Following the Democratic National Convention and the backstabbing by establishment Republicans, Trump is now down almost 15 points to Hillary Clinton in the polls. The die may have thus been cast. Nothing, save for – and God forbid – some massive Islamic terrorist attack just before the election this November, can likely turn the electorate.

I am not endorsing Donald Trump or telling our readers whom to vote for. That is not my job or role as the head of Freedom Watch Inc. and the founder of Judicial Watch years ago. But what we have all learned from this election cycle is that the establishments of both parties are an evil crew. But no politician, short of the Muslim King Barack Hussein Obama, is more evil than Hillary Clinton, a woman so callous and self-centered – in fact a dangerous, power-hungry and greedy megalomaniac who could care less about the Gold Star and other families who sacrificed their lives in Benghazi – that she would proclaim under oath before Congress, “what difference (do their deaths) make?”

Over 80 material witnesses (including White House Deputy Counsel Vince Foster) to the Clinton scandals died during their previous administration. I do not think all can be explained as just happenstance. Despite this, and the Wicked Witch’s other documented heinous criminal deeds, the Republican establishment would rather have her as president than Donald J. Trump. And in the last week and a half, they have joined with her to assassinate the Republican candidate chosen by the people. It’s time that these so-called leaders be taken to the “legal guillotines,” as they are not just despicable political hacks, but also traitors!
Read more at http://www.wnd.com/2016/08/the-assassination-of-donald-j-trump/#g8SRdsv44OuMjWX8.99