We’re going to need a bigger bed! Getting crowded under there. Move over, Trump and O’Reilly, make room for Geraldo!

On this morning’s Fox and Friends, professional crybaby Geraldo Rivera slammed Pamela Geller for taking a firm stand for our First Amendment, the very same First Amendment he has made a career of.

Geraldo, of all people, should be fan #1 in Geller’s corner, vigorously defending her right to speak as SHE sees fit, not him. Instead, he joined a small, but vocal chorus of fellow crybabies, whimpering, “every time I see her on television, I want to take a shower.” No number of showers is going to wash that hypocrisy away, Geraldo, who added, “She most reminds me of the Aryan Nation, KKK, racists.”

Wow! All this over cartoons!

“Look around this diverse, wonderful Fox News where we work,” whined Geraldo. Pick any group. Would any other group tolerate this taunting and inciting? We wouldn’t speak to that person. We would shun her if she picked on any other group but Muslim.”

You are either stupid or you are a liar, Geraldo. Neither of those is a good thing for a journalist (Brian Williams). You know better! Christians and Jews are bashed every day in the vilest ways without so much as a yawn. You know that!

Here’s the blatant Geraldo hypocrisy. Please watch both videos, below. The first video features Geraldo exercising his freedom of speech (which he suggests denying Pam Geller) and hypocrisy on Fox and Friends this morning. His hosts, Steve Doocy, Kimberly Gilfoyle, and Brian Kilmead respectfully and tactfully attempt to clear his vision, to no avail.

In the second video, filmed in 1988, Geraldo is hosting a panel of skinheads and white supremacists, clearly engaging in the very same (much worse, actually) incendiary, sensationalist journalism he is trashing Pamela Geller for. The entire studio erupts into a free-for-all as a black panelist challenges and assaults a white panelist, ultimately grabbing the white panelist by the throat, attempting to choke him out. As fists and chairs fly and chaos ensues, Geraldo suffers a broken nose.

So, you stay under the bed with Trump and O’Reilly, Geraldo. Mama Pam will protect your sorry ass! 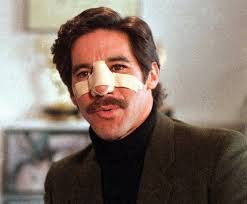