VIDEO: A huge mob of irate Venezuelans, literally starving, chase their president down the street

Socialism. Why would any nation of sane people allow it. It has never worked anywhere and has only produced poverty, misery, and government corruption. Yet, leaders, including many in America’s Democrat Party, sing its praises. Economic stupidity is the only explanation I have for that.

Today’s socialist experiment in Venezuela has resulted in Venezuelans literally starving. Everything is in short supply, and what can be found is prohibitively expensive, as “inflation in Venezuela is projected to increase 481% this year and by a staggering 1,642% next year, according to new estimates released Tuesday by the International Monetary Fund.”

Venezuela has one primary revenue source – oil. With the global glut of oil on the market shrinking crude prices, it has crippled Venezuela’s economy.

On Thursday President Nicolas Maduro traveled to Margarita Island where he was greeted by a mob of angry pot-banging protesters who chased him down the street, forcing him to leave immediately (video below). 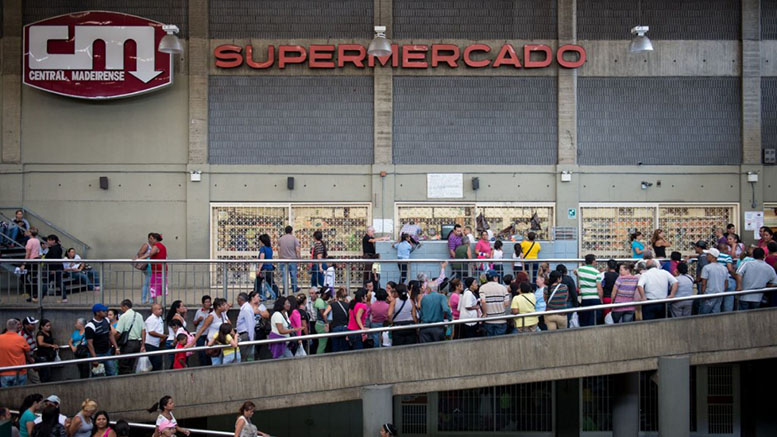 Line of Venezuelans waiting in line for their ration of groceries.

“There is no food. There is no paper. There is no medicine. We are dying,” Maria Alvarez told CNN en Español. “Please, help Venezuela. This has to end. Maduro, you have to understand that your time is up.”

Opposition leaders dubbed the massive demonstration “The Takeover of Caracas” and said they hoped the peaceful protest would have a historic turnout.

Crowd estimates varied greatly — depending on who was making them.

Protesters filled three major avenues in the east of Caracas. Images of the protests showed throngs of people in plazas and roadways.

Tensions were clear as officers in riot gear stood face to face with lines of demonstrators.

So far, the situation has remained peaceful.

But supporters of the opposition have warned that the government could be gearing up for a crackdown.

Venezuelan officials say the opposition has a nefarious aim: violence in the streets.

State television broadcast video of supporters of the government rallying in a large “anti-coup” protest.

Maduro told crowds clad in red that authorities had detained right-wing opposition leaders who were planning to plant bombs in the capital. He pressed his supporters to be ready in case of a coup.

“If a day comes and you see that something happens to President Nicolas Maduro … go into the streets and get justice,” he said.

“Those detained have a history of destabilizing acts in our country, and it cannot be ruled out that there will be more detentions of violence-generating elements of the Venezuelan ultra-right,” Interior and Justice Minister Nestor Reverol said this week.

Maduro told supporters that he was signing a decree to strip lawmakers of their immunity so they can face prosecution for crimes. The opposition holds the majority of seats in Venezuela’s National Assembly.

Government threats won’t make the opposition back down, said Capriles, who narrowly lost to Maduro in a 2013 election after longtime leader Hugo Chavez’s death.

“Maduro is afraid! The more obstacles there are, the more people will peacefully be in the streets!” Capriles wrote on Twitter.

Opposition leaders said Thursday’s march was the first of many protests they plan to hold as they push for a referendum.

“Today in the streets we demonstrated that a new phase of the fight has begun. The transition is urgent and inevitable,” she wrote on Twitter.

For months, opposition parties have been pushing for the government to hold a referendum on Maduro’s presidency.

Many Venezuelans have lost patience with the socialist president amid widespread shortages of food and medical supplies, surging crime levels, rolling blackouts and massive inflation. Experts predict Venezuela’s economy will shrink by 10% this year, while inflation will rise by 700%.

Venezuelan officials say they aren’t to blame for the country’s mounting problems; they accuse the political right of carrying out an economic war to undermine the government.