Well, well, guess who trained and employed the lead hosebag in the Arizona Trump rally protest/roadblock? ever hear of George Soros?

Meet Jacinta Gonzalez, the brain dead socialist bitch who gets the bright idea that it would be really cool to stop an American citizen from practicing his right to free speech, and while he is at it, making America great again.

So, the leftist lunatic chains herself to the door of a van that is blocking traffic in the middle of a busy road that leads to the Fountain Hills, Arizona Trump rally, preventing Trump fans from getting to the venue to listen to The Donald speak.

We could not have scripted it better!  This socialist dirtbag was trained by the best, world class asswipe/agitator, George Soros, the well-known capitalist who believes socialism is the answer (go figure). He is also funding the paid parasite’s unconstitutional escapades. 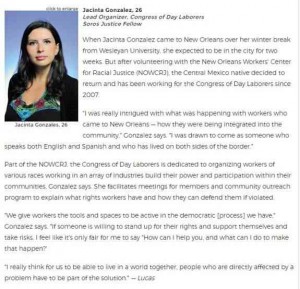 If I had been the police officer in charge of this spectacle of a crime scene, I would have handcuffed the repugnant bitch to the van door she was already wearing as a necklace. Then I would have a couple of officers cut the door off of the van at the hinges, and laid the door and its companion hosebag along the side of the road as the van was being driven off of the street to clear traffic. Then I would have walked over to the nasty Soros protege, smiled, and said, “Have a nice day, and thanks for playing!