I was so hoping Donald Trump or the moderator mentioned Shahram Amiri during tonight’s debate and asked Hitlery for an explanation as to how Amiri could be discussed in obviously classified emails that were transmitted over Hitlery’s private, unsecure server.

Shahram Amiri was an Iranian nuclear scientist who was providing information to the US government regarding Iran’s nuclear program. Described as “our friend” by the US State Department in classified emails, Amiri was executed last month by the Iranian regime.

According to an August, 2016 Fox News report, “The Iranian scientist executed by his own government after being convicted of spying for the U.S. seemingly was discussed in emails that crossed Hillary Clinton’s private server, fueling Republican accusations about how “reckless” the former secretary of state’s server set-up truly was.

Iran confirmed Sunday that Shahram Amiri was hanged last week – years after he defected to the U.S.; later returned home, where he was heralded as a hero; and then was tried and convicted of spying for the U.S.

While there are conflicting accounts of Amiri’s odyssey from Iran to the U.S. and back, he did appear in a video in 2010 while living in the U.S. claiming to have been kidnapped by American and Saudi agents. He walked into the Iranian-interests section at the Pakistani Embassy in Washington later that year and demanded to be sent home.

But there are reports going back years that Amiri, despite his claims to the contrary, was being paid to provide the CIA with information about Iran’s nuclear program.

And, un-redacted Clinton server emails released last year appear to refer to Amiri as ‘our friend’ – though it’s unclear whether those references put him at any additional risk.”

Amiri’s body was reportedly returned to his mother with rope burns around his neck.

Senator Tom Cotton: “In the emails that were on Hillary Clinton’s private server, there were conversations among her senior advisers about this gentleman. That goes to show just how reckless and careless her decision was to put that kind of highly classified information on a private server. I think her judgement is not suited to keep this country safe.” 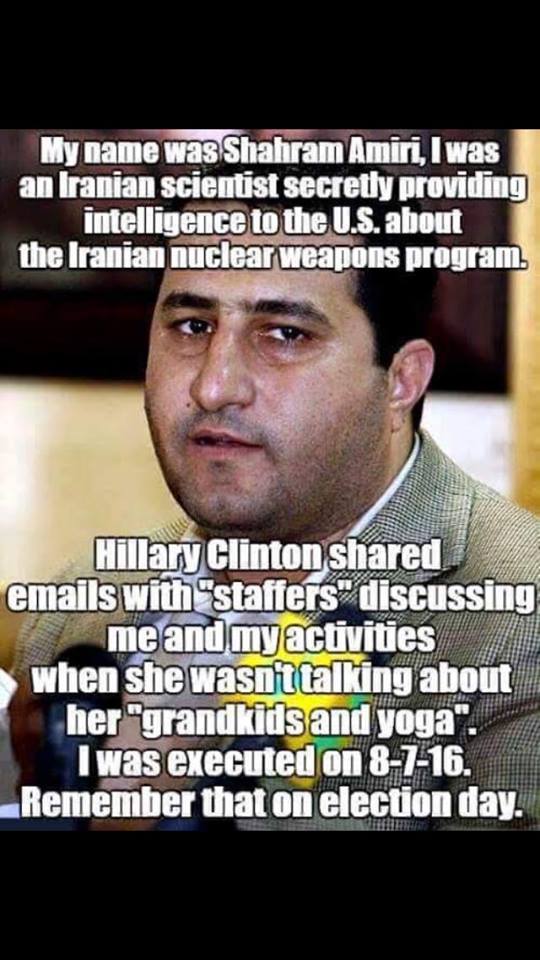