Good news for Republicans! Of 10 incumbent Dem Senators, 5 are in big trouble, trailing their GOP opponents. Other 5 face serious challenges

If the elections were held today, of the ten incumbent Democrat Senators running for re-election this fall, five would lose to their Republican opponents and likely two more, meaning Republicans could pick up 7 of 10 Democrat Senate seats or more.

This is according to a new Axios/Survey Monkey poll.

Both Pennsylvania and Florida could be surprises. Both were strong for Trump in 2016. I see Pennsylvania as a tossup and I believe Rick Scott, with far better name recognition, exposure, track record, and a better organized and funded campaign will win the Florida seat currently occupied by Bill Nelson.

On a side note, I expected Joe Manchin of West Virginia to have switched parties already. Not switching is hurting him terribly. Since Manchin’s election in 2012, West Virginia has gone deep red, thanks in large part to President Trump’s reviving the dying coal industry. I see no way he gets re-elected as a Democrat. If he switches parties and wins the primary, if there is one, his chances of re-election are good. Manchin, currently a moderate Democrat, bucked his party several times over the years, voting with Republicans.

I see 7 of the 10 seats swinging to the Republican side this fall, which would be very bad news for Democrats and would put the Republicans within just two seats of the magic 60-seat, filibuster-proof majority. 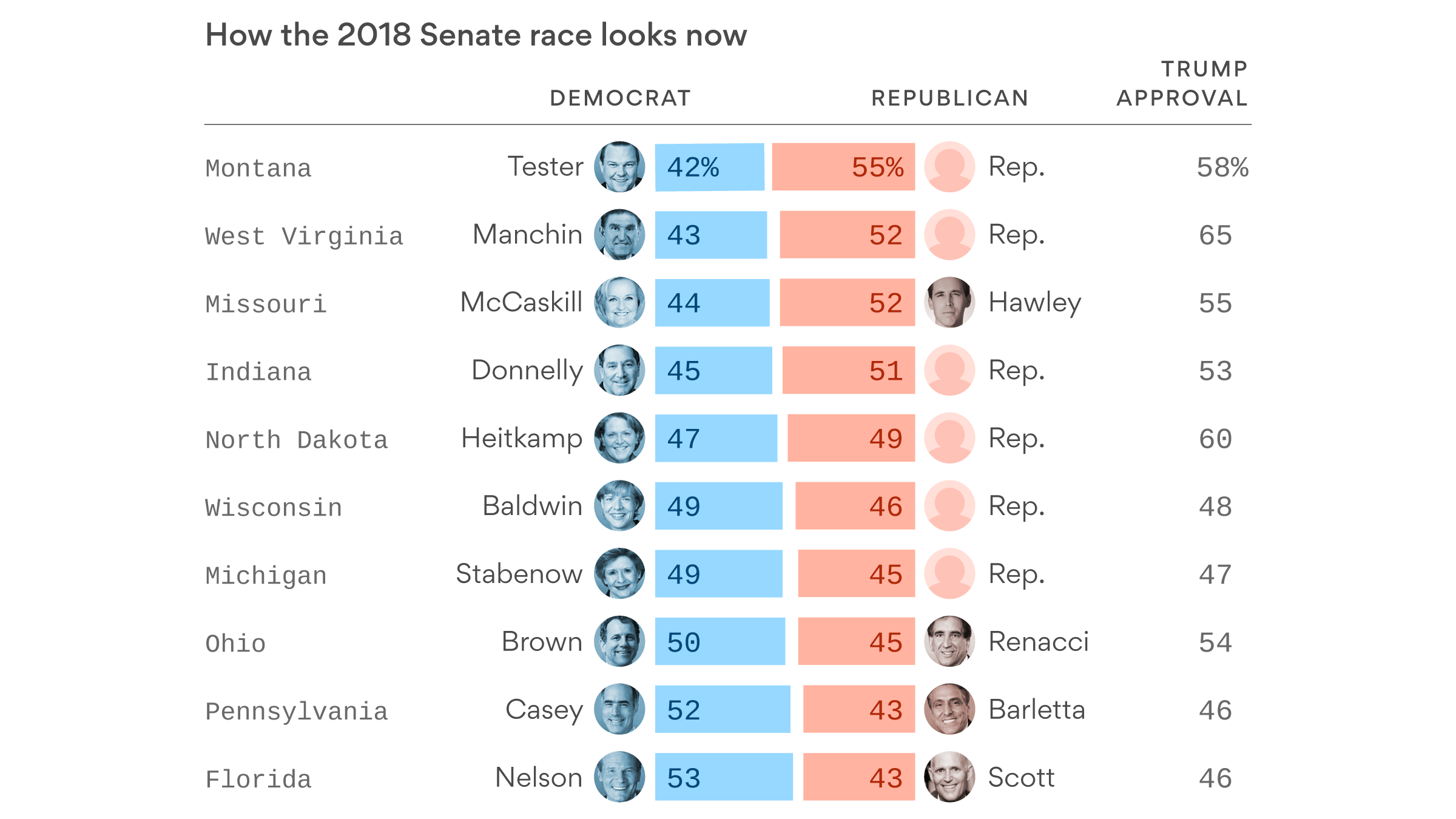 Why it matters: Democrats are defending 10 Senate seats in states that President Trump won in 2016. In six of those states, Trump’s approval is higher than 50% (compared to 43% nationally). These numbers underscore how hard it will be for Democrats to pick up the two seats needed to win the majority despite Trump’s troubles.

The most vulnerable senators are Joe Manchin of West Virginia, Jon Tester in Montana and Claire McCaskill in Missouri. Each of their approval ratings is either under 50% or just above it, while Trump’s is well above that in all three states.

The least vulnerable senators are Bill Nelson of Florida, Bob Casey of Pennsylvania, and Sherrod Brown of Ohio. Trump’s approval is at just 46% in Florida and Pennsylvania and 54% in Ohio.

But, but, but… With the election many months away and final Republican opponents not set, these numbers are likely to change as real GOP challengers get involved in the race. The approval ratings of each senator may give a better idea of where they stand with voters in their states.