Hitlery has been accepting money from a French company that has been paying protection money to ISIS. Who is scummier, Hitlery or ISIS? Really, I want to know what you think 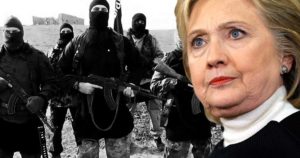 Hitlery loves ISIS! Or so it appears. She has been accepting money from French concrete company Lafarge, which has also been paying protection money to ISIS to protect its drivers while operating in northern Syria.

According to Newsmax, “Donald Trump’s campaign slammed his rival for the White House, Democrat Hillary Clinton, on Monday following reports that a company that has donated to the Clinton Foundation also paid taxes to the Islamic State (ISIS) to continue its operations in Syria.

“More than any major presidential nominee in modern history, Hillary Clinton is tied to brutal theocratic and Islamist regimes,” Trump senior policy adviser Stephen Miller said in a prepared statement. “Now we learn she has accepted money from a company linked to ISIS. All the while, she refuses to tell the truth about radical Islam’s war against people of different beliefs, lifestyles and values.”

The French newspaper Le Monde first reported the actions of cement company Lafarge, and the story was also reported in English by France 24.

Lefarge paid armed groups, including ISIS between 2013 and 2014 so its employees and trucks could make safe passage in northern Syria, according to Le Monde.

A contributor’s list to the Clinton Foundation includes Lafarge, Miller’s statement pointed out. Lafarge gave between $50,001 and $100,000, according to the site.”

But, of course the liberal mainstream media is all crickets on this disgusting news. ‘Nothing to see here, folks. Move along.’