Bizarre! Judge orders woman to remain in jail until she signs a consent to have her 4-year old son circumcised. In tears, she signed today

Forced consent is not consent! Although this bizarre story may appear on its face a simple power struggle between two parents, it clearly illustrates the power the state has over individuals in contemporary America. Our Founding Fathers aren’t turning over in their graves today. They are wandering about their respective cemeteries, screaming and tearing their hair out. The gift they gave the world, the American Experiment, founded upon the principle of individual liberty, looks more like North Korea every day.

Heather Hironimus has been in jail since May 14 in Palm Beach County, Florida. Her crime? Refusing to have her 4-year old son, Chase, forcibly circumcised. Chase does not want to be circumcised. So his mother, respecting his wishes, has refused to sign a judge’s consent form for a forced circumcision. Judge Jeffrey Dana Gillen sent Hironimus to jail when she refused to sign the form, and made it clear that she would not be released until she signed a document that she was clearly and unlawfully being coerced into signing. Reluctantly and in tears, Heather signed the coerced consent today.

If this egregious abuse of power on the part of Judge Gillen is permitted to stand it will set a terrifying precedent. Beyond being a robed tyrant, Judge Gillen is ignoring the wishes of the real victim in this case, Chase himself, who is terrified of the unnecessary and potentially dangerous procedure. Complications from circumcision are twenty times greater for a boy circumcised after the age of one, compared to boys circumcised before the age of one. The judge is also apparently ignoring the potential for psychological damage stemming from his forced circumcision order.

Why aren’t Chase’s wishes being considered? Why can’t the judge allow Chase to make this decision when he is eighteen? How can a judge force anyone to undergo an unnecessary operation? He is basing his decision on a contractual agreement Chase’s parents signed when they separated, shortly after Chase’s birth. In the agreement the father was given sole responsibility for Chase’s circumcision. Chase was an infant then. Circumcision would have been much safer, without the potential for enduring physical and/or psychological injury. Things have changed. Chase is aware now. The contract should be null and void as the father procrastinated and the window for a safer circumcision has closed. But the judge is not considering any of this. He is lazy and cowardly, taking the easy way out, relying on a document signed years ago, when Chase’s world was a different place.

I don’t know the best way to stop this horror being forced upon a four-year old boy, but surely Governor Rick Scott could step in. I am including a link to his contact information below. I will certainly be writing him to encourage his intervention in the case, if it isn’t too late. Who knows, the thoughtless father may have poor Chase on an operating table tomorrow morning. I encourage all who read this to contact Governor Scott to put a halt to Chase’s nightmare. I am also including a link, below, to his Mom’s website, Saving Chase. if you are able please donate to help stop this judge’s egregious order. And, by all means, please share this article to get the word out. Nothing makes things happen like public pressure!

This is more than just an abhorrent abuse of power. It is wicked. Somewhere, Josef Mengele is smiling.

If you can, please donate to help Chase’s Mom fight this horror or simply offer a note of support. Link…. Saving Chase….

Scroll down to view video…. 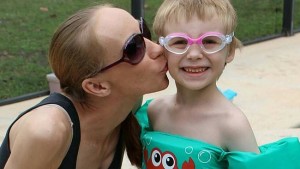 Ater years of fighting to stop her son from being circumcised, a West Boynton mother on Friday signed her consent for the procedure moments after a judge had again ordered her to remain in jail until she did.

Heather Hironimus, who lost attempts in two state courts to block the child’s father, was arrested May 14 in Broward after months of hiding with the boy in a domestic violence shelter and receiving support from anti-circumcision activists around the world.

Hironimus, 31, at first refused Friday to sign the form and was about to return to Palm Beach County Jail after Circuit Judge Jeffrey Dana Gillen granted full custody and parental decisions to the father for the time being.

But moments later, attorneys for the father, Dennis Nebus, were summoned back into the courtroom because Hironimus had changed her mind. Still wearing handcuffs, and weeping, she took a pen from her attorney, Thomas Hunker, and signed the consent.