Like I give a flying doodly what a goat-humping camel jockey who wears an Italian restaurant tablecloth for a hat thinks! GMAFB!

So, how many Muslim refugees have the Saudis accepted, you ask? Exactly none! Nada! Niente! Zip! Zilch! Zefuckinro!

The hypocrisy is palpable. The Saudis have banned Muslim migrants to their own country because they fear terrorism (the Saudi royals aren’t as stupid as they look). Then out the other side of their mouths they call Donald Trump a bigot and a racist for suggesting a TEMPORARY ban on Muslim migrants to the US, something Jimmy Carter did in 1980 without the first disparaging word from the Saudis, the media, or anyone else.

I reckon the desert dopes believe it is fine for Americans to live in constant fear and danger in their own homes, but God forbid that a fellow Muslim be permitted residence in the big sandbox we know as the Islamic state of Saudi Arabia.

What the pampered prince fails to realize is that anyone who disses The Donald gives him a nice boost right smack in the presidential poll numbers. 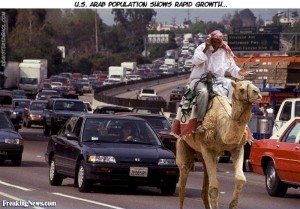 Reportedly the richest of many Saudi Princes, Alwaleed Bin Talal says Trump should quit the 2016 election as he’s “a disgrace not only to the GOP but to all America.”

His demand follows Trump’s call for a temporary ban on Muslim migration, since the San Bernardino massacre by two Muslims — an immigrant and a son of an immigrant.

The prince is supposedly worth roughly $24.8 billion — not as much as Trump’s other billionaire critics, Mark Zuckerberg, for example — but enough to be comfortable when socializing with Bill Gates, Michael Bloomberg or Carlos Slim, the Mexican part-owner of the New York Times.

The prince has already donated tens of millions of dollars to set up pro-Islam advocacy centers at several U.S. universities, including Harvard and Georgetown.

.@realDonaldTrump
You are a disgrace not only to the GOP but to all America.

Withdraw from the U.S presidential race as you will never win.