Counter-protesters in Rosebud, Missouri met Michael Brown protesters with racial slurs and a display of fried chicken, a 40-ounce empty beer bottle, and a melon.

The protesters are marching to Jefferson City, protesting across the state the grand jury decision in the Michael Brown case. Organized by the NAACP, the “Journey For Justice” will end at the governor’s mansion in Jefferson City. 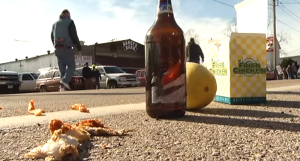 How the protesters plan to effect change is not clear. It appears they want a man who has been rightly declared innocent of any charges to go to trial. Would they be happy with a trial acquittal? No! Physical evidence, three independent autopsy reports, and many eyewitness reports, all exonerating the officer, Darren Wilson, are not enough. In fact, they are completely ignored.

Why are these marchers protesting in the first place? They claim that their goal is to change the leadership in the Ferguson Police Department. What? How is that going to help black thugs get away with assaulting police officers? Do they expect a black sheriff to be appointed who allows black thugs to assault, even murder, cops? 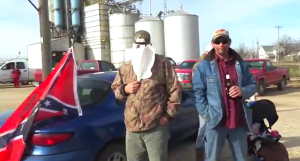 Michael Brown made several very bad decisions on a very bad day, and unfortunately those decisions resulted in his death. But clearly Darren Wilson had no choice.  Had Michael Brown been white would Wilson have reacted the same way? YES! He would! And this entire episode would have been no more than a  brief report on the St. Louis nightly news.

While I sympathize with the frustration the counter-protesters are feeling with the pointless, and seemingly racist stupidity of the protesters, no good is going to come from returning to the racist redneck behavior of the 1950s. The NAACP-incited Journey For Justice is silly, ridiculous. Let them march, and then go home.

Said one counter-protester, “They’re just trying to prove a point that’s not there to prove.”