Senator Jeff Sessions confirmed that Mitt Romney is being considered for a cabinet-level position by President-elect Donald Trump.

I don’t know exactly what to make of that. While on the one hand I defer to Donald Trump’s superior hiring skills and I will back whatever he does, I worry a bit because Romney is the quintessential Rino in the swamp that Trump is charged with draining.

Considering what Trump did for Romney in 2012, backing him financially, and what Romney did to Donald Trump in 2016, calling him “a phony, a fraud,” that he was “playing the American public for suckers,” and that “his promises are as worthless as a degree from Trump University,” I find it amazing that Trump is considering Romney for a cabinet position. 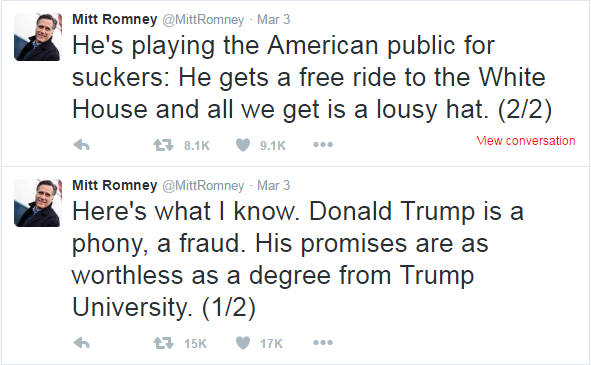 Seriously, Romney is a former Republican presidential candidate and said those things about the man who will be President in two months, and who is thinking about hiring Romney.

Maybe The Donald is setting the Rino up. Maybe he plans to schedule Romney for an interview for Secretary of State, then go golfing that day and let Romney sit and wait for him until the Rino gets tired and goes home. Nah, Trump has far too much class for that gutter-level treatment.

I have no respect for Mitt Romney at all. He was a failure in 2012, and he failed miserably in 2016. Those of us who are peons saw what was happening, that this revolution was going to change America and the world for the better, and yet Romney couldn’t see it. In fact, he bet against it. I don’t trust anyone who can’t see past the end of their nose.