Let’s review. Here is how the left was celebrating Barrack Hussein’s trade of 5 high-value terrorist prisoners for a worthless Army deserter

Remember how the Hussein administration and the liberal media were falling all over each other in collective orgasm, crowing about the unparalleled success of our lord and savior Barrack Hussein’s magnificent diplomatic triumph in gaining the release of what he and his bootlickers were calling a hero who served with honor and distinction?

Remember how you threw up a little bit in your mouth as you watched the circus parade of leftist numbskulls strut to the nearest microphone and wax patriotic over this stunning Democrat achievement? Let’s review:

"It's a good day." —President Obama to Bob and Jani Bergdahl on the recovery of their son, Sergeant Bowe Bergdahl pic.twitter.com/8gb6tkdSZ0

Welcome home, Sergeant Bergdahl. Today we are elated about his return and reaffirm our commitment to recover the warriors still left behind.

Our hearts are filled with joy for the Bergdahl family

Here are the facts. Bowe Bergdahl is being charged with desertion by the United States Army, as he most certainly should be. He walked away from his unit in wartime. That is clear “desertion,” and according to military.findlaw.com, desertion is punishable by death, even though we all know that Bergdahl will not receive a death sentence. No matter how many years of prison he will be sentenced to, if convicted one has to wonder if Barrack Hussein will pardon him prior to leaving office.

The Bergdahl affair is just one more stinking corpse in the Hussein closet.

C’mon, Congress, what does it take for you to get off your asses and remove this trash from our White House?! 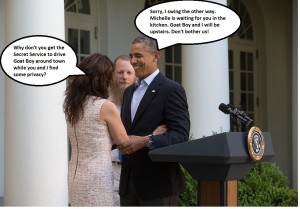 I couldn’t resist captioning this pic.