VIDEO: Racist professor: “We have got to eliminate the gringo…. we have got to kill him.” What should we do with this racist? 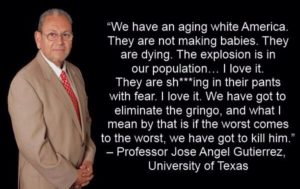 According to Pat Dollard, Bill Clinton gave this aspiring mass murderer the Presidential Medal of Freedom. In addition to co-founding La Raza, he is also an attorney and professor at the University of Texas at Arlington. David Horowitz features Gutierrez in his 2006 book The Professors — The 101 Most Dangerous Academics in America. According to Horowitz, Gutierrez is the 6th most dangerous Academic in America.

From youtube…. Bill Clinton gave this loony Chicano separatist Jose Gutierrez the Presidential Medal of Freedom. Jose calls for the elimination of the gringo(white people) from the United States.
This idiot Jose has NO plan for the future. His answers all end tragically. Americans of every race deserve to be protected from illegal immigration but Jose is a Tan-Klan disgrace who pledges allegiance to the Mexican flag & not Old Glory.

(Pro-Gringo Killer) Jose Angel Gutierrez a self described Chicano Separatist is also an attorney and professor at the University of Texas at Arlington.

“The border remains a military zone. We remain a hunted people. Now you think you have a destiny to fulfill in the land that historically has been ours for forty thousand years. And we’re a new Mestizo nation. And they want us to discuss civil rights … law made by white men to oppress all of us of color, female and male. This is our homeland. We cannot—we will not—and we must not be made illegal in our own homeland. We are not immigrants that came from another country to another country. We are migrants, free to travel the length and breadth of the Americas because we belong here. We are millions. We just have to survive. We have an aging white America. They are not making babies. They are dying. It’s a matter of time. The explosion is in our population…. I love it. Se estan cagando cabrones de miedo [Spanish for “They are shi**ing in their pants with fear”]. I love it.

Our numbers now are such that we are critical mass throughout the nation. Depending on what state you’re in, we’re on the verge of already being a majority minority. In some places, a majority, and in years to come, probably about one quarter of the entire United States population. We will exercise our rights, which include political sovereignty. So Aztlán will become a reality. It is not our fault that whites don’t make babies, and blacks are not growing in sufficient numbers, and there’s no other groups with such a goal to put their homeland back together again. We do. Those numbers will make it possible. I believe that in the next few years, we will see an irredentists’ movement, beyond assimilation, beyond integration, beyond separatism, to putting Mexico back together as one. That’s irridentism. One Mexico, one nation…. This whole region will become the new Meso-America once again.”