I love Salon magazine! I mean for a bird cage liner. It can’t be beat.

I ran across this article (excerpted below) from Salon, in which racist manatee, Brittney Cooper, who somehow became a professor (Affirmative Action, I’m sure) at Rutgers University, goes on a white-hating tirade, condemning the entire Caucasian race for actions she has pre-judged racist by an HISPANIC Texas state trooper in the death of Sandra Bland. (There is a link at the bottom of this page to another of her racist rants from April, 2015)

Make no mistake, this racist sow is condemning the WHITE race for conduct by an HISPANIC police officer! That would be like condemning the entire black race for the murder of Kate Steinle, committed by an hispanic. Simply too bizarre for words. It is like the media trying to get away with labeling George Zimmerman a white hispanic, proving that bashing whitey sells on Main Street.

Sandra Bland’s death is unfortunate. Her arrest was unfortunate. The HISPANIC arresting officer, Brian Encinia, appears to have been wrong, although I will certainly not condemn him, as the racist manatee has done, before he has had his day in court. I am certain, however, this his “apparent” mistreatment of Ms. Bland was not racially motivated. There is no evidence of racist treatment here, no racial slurs, no apparent racial bias of any kind. He simply appears to be one of those cops on a power trip. There is no question that he would have treated anyone, of any race, in the same disrespectful and improper manner. He’s just that kind of person.

Ms. Cooper believes that all white people must hang their heads in shame and guilt over the actions of an HISPANIC police officer, claiming “You are them. And they are you.” Do you hang your head in shame every time a black thug takes the life of a white person, Brittney? I didn’t think so!

I have news for you, Ms. Cooper – many white Americans, including myself, do not feel the least bit of guilt for anything that happens to blacks. NONE! Racism lives only in your diseased head. You have every legal right that I do, and in fact, you have more, as blacks are favored in college admissions, job quotas, etc. Every opportunity is at least equally available to blacks as it is to whites, or any other race, even President of the United States.

Now, if you’ll excuse me, I have a bird cage liner to replace. 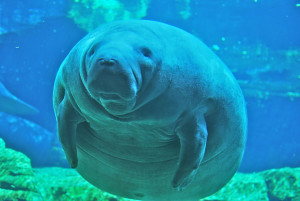 Copy, below, excerpted from an article by racist manatee Brittney Cooper, Salon

All Sandra Bland did was ask questions. Now she is dead. Supposedly after hanging herself in a jail cell. Just a few hours before her sister was coming to bail her out. None of that makes sense. What does make sense are the words of her mother, Geneva Reed-Veal. She said,

“Once I put this baby in the ground, I’m ready. This means war.”

Nothing about this officer’s actions were legal. It is the evidence of Sandra Bland’s irritation that caused this officer to escalate. He firmly expected to be able to harass a citizen going about her business and have her be okay with it. He expected that she wouldn’t question him. He wanted her submission. Her deference. Her fear.

White power. Black submission. It’s the oldest trick in the white supremacist handbook. The officer might think he wanted Sandra Bland’s respect. But what he really wanted was her fear. And the fact is: He is entitled to neither. She did not owe him either her respect or her fear. When his white maleness and his badge didn’t elicit the first, he used the power of that badge to compel the second.

When we refuse gratitude, they enact every violence — they take our jobs, our homes, refuse us respect, and kill us. And then they demand that we be gracious in the face of it.

Black gratitude is the prerequisite for white folks to treat us like human beings. But in my faith tradition, we define grace as “unmerited favor,” as undeserved, unearned. And it is God’s grace toward us that compels our gratitude toward God. Not so in a culture of white Supremacy. In a culture of White Supremacy, White people get to be God without grace. Black people must give all the grace and act grateful for opportunities to do so. If we stumble on the wrong day with the wrong white person, we pay for it with our lives.

Now here’s what I know. White people don’t like to be lumped in with each other. They don’t like racial generalizations. But in Sandra I see myself, and every interaction I’ve ever had with the police, both good and bad. Black communities are weeping and mourning with her mother, friends, and four sisters, because we know that at any time, she could be any of us. Black people don’t have the luxury of refusing identification and commonality.

This is why some Black people are asking themselves, “Why didn’t she just put out the cigarette, shut up and get through it?” Because she loved herself. Because she was on her way to fulfill her dream. Because she knew she was somebody and that she didn’t deserve to be mistreated. Because the demand for dignity always asserts itself at the height of an assault. Because the choice never should have been between her life or her dignity. Neither her life nor her dignity should be a casualty of an encounter with police. But there is what-should-be and what-is. Sandra Blandshould be starting the second week of her job at Prairie View A &M University. Instead her mother is preparing to put her “baby in the ground.”

White people resist seeing themselves in the face of the oppressor. That mirror reflection is almost too much to bear. I get it. So then they resent the person that holds up the mirror. But let me just say as directly as I can: White people must begin to see themselves in the faces of the mostly white police officers who keep committing these atrocities against Black and Brown people. This will not stop until you recognize that you are them. These officers are your brothers and sisters and aunts and cousins, and sons and daughters and nieces and nephews, and friends, and church members. You are them. And they are you.