This is why Donald J. Trump will be inaugurated President of the United States on January 20, 2017

I have made the point many times that Donald Trump’s greatest asset is his creative marketing genius. He is the best! No one else is close. Grabbing a headline here, jetting off to give kids a chopper ride there, all the while dominating the political landscape so that there is no air left in the room for any other presidential hopeful, most of whom sit quietly on the sidelines and watch the show. A few, however, like Rick Perry and the unfortunate clowns at Fox News (RIP) have made the mistake of attacking The Donald. Perry was last seen searching for aluminum cans in a gas station dumpster to pay his campaign staff.

It is a new world. The American electorate is alive like it has never been before and it is all about everything Trump, the first candidate in a long time who minces no words, who says what he means, who doesn’t hesitate to call a spade a spade, who believes political correctness is for losers, but most importantly Donald Trump is saying the things Americans want to hear and he is saying those things in simple and direct language, the very same language Mom and Pop Main Street use at the kitchen table. And for that the American people are responding in a big way, catapulting Trump to the top of the polls, where he is not content to sit on his lead. Multi-bazillionaires don’t become multi-bazillionaires by resting on their laurels. Instead, The Donald is ever plotting his next marketing coup.

The only candidate who can stop Trump now is Trump. Barring an uncharacteristic fumble, Donald Trump will be inaugurated President of the United States on January 20, 2017. 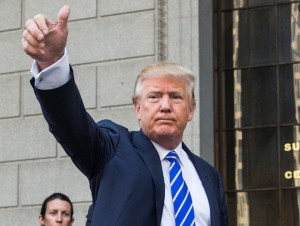 Who’s next on Donald’s hit list? Everyone wants to know. Donald Trump is like the old EF Hutton commercial- when he speaks, everyone listens. Brilliant.

Like it or not, the reality is America is no longer U-S-A. We are T-M-Z. We are a nation that idolizes celebrity. We’re one big reality show. That’s how Obama got elected- twice. He was elected as “American Idol.” Obama was famous and exciting. That’s what people want in a candidate.

Donald Trump is the “American Idol” of the GOP.

Pick a fight with Megyn Kelly. Pick a fight with Hilly, Huma and Anthony Weiner. Trump makes headlines by picking fights with celebrities and saying the very things we all whisper about at the water cooler (but would never dare say out loud), thereby making himself more famous every day. Controversy sells. Trump and his fights are all we talk about. Brilliant.

Trump gets it. The other candidates don’t. “The squeaky wheel gets the oil.” Donald has sucked all the oil and oxygen out of the race. By appealing to TMZ nation, Donald has made us into “Trump Nation.” It’s Trump Channel all day, 24 hours a day, on every channel on the dial. Or haven’t you seen Trump’s last two rallies carried live, in their entirety on CNN?

Some dummy, huh? I’ll bet Jeb Bush and Scott Walker wish they could be as dumb as Donald.