Photo, above: 40,000 screaming Trump supporters come out to see and hear The Donald in Mobile, Alabama

A new poll conducted by Pew Research has discovered that among registered Republican voters the most conservative are those who support Donald Trump.

Those who supported Ted Cruz, John Kasich, or another GOP candidate were less conservative than Trump supporters on a number of key political issues, including immigration reform, border security, and building a border wall.

Trump supporters were also more conservative on issues relating to free trade, more scrutiny of Muslims immigrating to the US, and America being the world’s policeman and problem-solver.

I apologize for the formatting of the charts, below. If you just follow the color coding, they are pretty easy to follow. 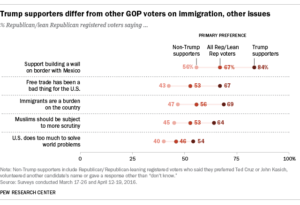 “Supporters of Donald Trump differ substantially from other Republican voters in many of their foreign policy attitudes. And these differences extend to their views of immigration and government scrutiny of Muslims in the U.S.

Trump supporters have a distinct approach to global affairs, according to Pew Research Center surveys conducted in March and April. Fully 84% of those who support Trump for the GOP presidential nomination favor building a wall along the U.S.-Mexico border. That compares with 56% of Republican voters who preferred another candidate for the Republican nomination – those who supported Ted Cruz or John Kasich, who last week suspended their presidential campaigns, or volunteered someone else.” 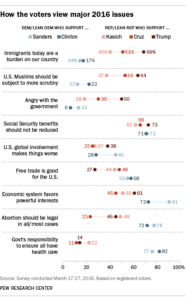