Barack Hussein has been denying the Kurds weapons to fight ISIS. Now he is taking credit for their recent victories over the terrorist group

Is there any limit to Barack Hussein’s delusional arrogance? The Kurds have been begging The One for weapons for years to fight ISIS. King Hussein has said “no” over and over. Now the Kurdish army (Peshmerga) is kicking ISIS in the scrotum, and guess who does the ghetto strut to the nearest microphone to take credit for the Kurdish success? If you guessed Barack Hussein (or his official mouthpiece) you may proceed.

Following up on their stunning victory last fall, retaking Kobane from ISIS, Kurdish fighters dealt the terrorist organization another major setback on Tuesday, taking control of Tal Abyad near the Turkish border, cutting off a major supply route to Raqqa, which is ISIS headquarters and de facto capital of the Islamic State. The Kurds did this with antiquated weapons from the 80s Iran/Iraq War, against ISIS, which is armed with the advanced American weapons that Iraq abandoned when they hightailed it, and which the Kurds have been begging Barack Hussein for.

Obama press secretary Josh Earnest claimed the Kurdish victory in Tal Abyad “is actually a direct consequence of an earlier military operation that President Obama ordered,” referring to the airdrop of supplies to aid the Kurds in their conquest of Kobane last fall. He failed to mention that some of those supplies actually wound up in the hands of ISIS.

“Because of the president’s decision to order the airdrop of significant resources and equipment and reinforcements, and because we were able to work with Turkey to allow for additional forces to enter that city, we saw that coalition …. backed by coalition airstrikes (most of which returned to their base having delivered no ordnance), of course …. drive (ISIS) out of Kobane. And over the last several months, those forces have steadily driven east across northern Syria,” boasted Earnest.

KIRKUK, Iraq –  The Kurds are enjoying increasing success against ISIS, and not only are they doing it without the U.S. weapons they seek, they often find themselves going up against American-made equipment.

In Syria, Kurdish Peshmerga forces captured the key city of Tal Abyad from ISIS on Monday, the latest in a string of Kurdish victories over the black-clad jihadist army in Iraq and Syria. Leaders of the ethnic army told FoxNews.com recently that they could be even more effective if U.S. weapons went to them instead of the enemy, which has seized massive amounts of American weaponry from the Iraqi forces it has defeated in battle.

“What America has given to Iraq in the past, what Iraq borrowed from Russia and U.S., ISIS has,” said Peshmerga commander Kemal Kerkuki. “They are using many, many, mines, C4, TNT, snipers, mortars; they have Humvees, they have tanks, they have different kinds of weapons.”

“We are fighting for all the world, for all civilization.”

U.S. military aid is distributed through Baghdad, which has an arm’s length relationship with the semi-autonomous Kurds in the north. Without direct aid, the Kurds have largely made do with aging equipment and weapons they seize from ISIS.

“The weapons of [ISIS] are 10 times that of the Peshmerga,” said Maj. Gen. Sirwan Barzani, another Kurdish commander whose forces are based southwest of Erbil.

Much of the weaponry the Peshmerga are currently using consists of old, worn-out munitions from the Iran-Iraq war more than 30 years ago.

One other weapon the Peshmerga have is improvisation. With no anti-mine vehicle to pave their way into ISIS-held territory, Barzani had a tank captured from ISIS re-engineered to roll through mined areas where it squashes IEDS before they can harm troops. Barzani told FoxNews.com the vehicle is crucial for making retaken land safe to once again inhabit.

Kurdish leaders have long been at odds with Baghdad, largely over their well-known desire for full autonomy. The Iraqi government has previously barred the Kurds from buying weapons, fearing that directly arming them could strengthen the Kurdish separation movement and undermine Baghdad’s desire for national unity.

Kurds say now is the time for both to focus on the common enemy, especially as Iraq plans to retake Iraq’s second-biggest city, the northern metropolis of Mosul. Any such plan would likely benefit greatly from cooperation. 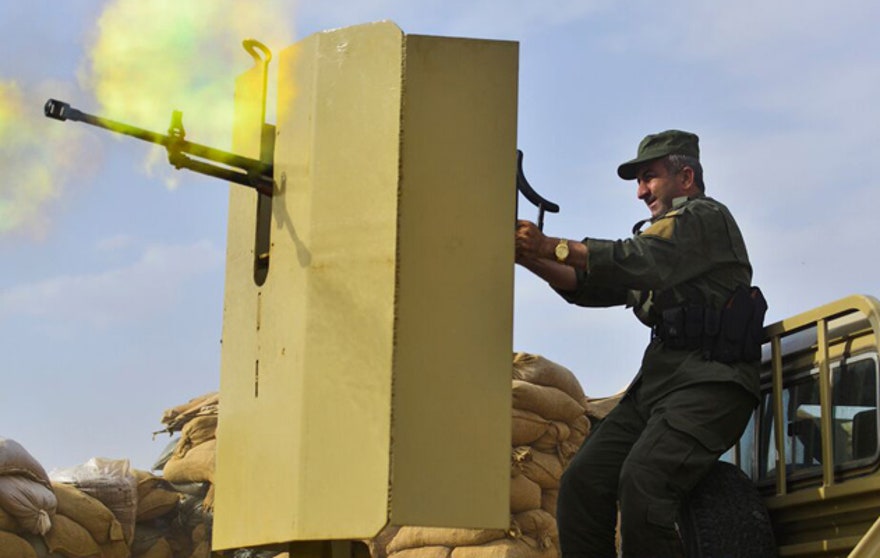 Improvisation is critical for the Kurdish forces, who are often stuck with weapons from the 1980s Iran-Iraq war. (Crystal Schick and Gavin John)

“If ISIS stays in Mosul, then it is a danger for everyone,” said Kerkuki. “If we can push them out, then it is a benefit for all.”

With Iraqi forces largely bogged down closer to Baghdad, where ISIS has captured key parts of Anbar province, the Peshmerga say they could retake Mosul themselves if they had the weapons.

“We ask the democratic lands to help Kurdistan pass these things [munitions] direct through Kurdistan and not thru Baghdad,” said Kerkuki. “We cannot trust Baghdad.”

Kerkuki, like other Kurds, reasons that in the fight against ISIS, the Peshmerga are the tip of the world’s spear. Given that, why shouldn’t they have modern and plentiful weapons instead of facing a de facto arms embargo?

“We ask all the Canadians, and the Americans and the whole coalition and NATO, please send good weapons to us to fight against this biggest terrorist group in the world,” said Barzani. “We are fighting for all the world, for all civilization.”