At a PEGIDA rally in England, anti-Islamisation of Europe protesters carry signs reading, “TRUMP IS RIGHT”

At a PEGIDA (Patriotic Europeans against the Islamisation of the West) rally in Birmingham, England, protesters carried signs reading, “TRUMP IS RIGHT,” a clear reference to Donald Trump’s suggestion/proposal to halt Muslim immigration to the United States until we can get a handle on the Islamic terror problem.

Several Muslim”refugees” that were welcomed with open arms by European countries and the United States have become terrorists and killed many innocent westerners.

PEGIDA has grown by leaps and bounds across Europe, as European citizens have become fed up with their elected leaders, who are permitting virtually unlimited Muslim immigration onto the continent, straining the social welfare system and other resources, and increasing crime, especially rape, as Muslim men seem to believe that they have a “right” to rape. Germany, alone, accepted over 1,000,000 Muslim refugees in the past year.

From Josh Halliday, The Guardian

Supporters of the anti-Islam group Pegida staged a silent march in Birminghamstanding against what they called “the most dreadful, subversive, violent ideology” as clashes broke out at twin rallies in France and the
Netherlands.

About 200 demonstrators gathered for the inaugural Pegida rally in the UK – half as many as expected by police – which took place on an industrial estate miles from the city centre.

The rally appeared to pass without incident as dozens of riot police kept Pegida supporters away from about 60 anti-fascism activists at Birmingham International rail station.

West Midlands police said they made one arrest – at the anti-fascism counter demonstration for a public order offence – during the Birmingham rally, one of 14 expected to take place around Europe on Saturday. 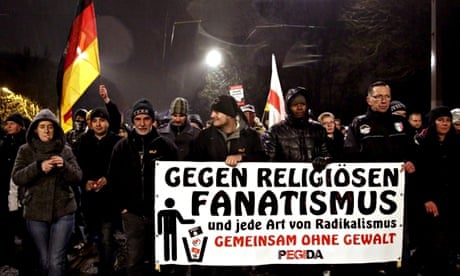 Tommy Robinson, the former EDL leader who organised the Pegida UK
rally, said after the march there had been “no racism, no inciting hatred, no violence, no thugs, no hooligans. This is a movement you can support”.

However, lecturer Paul Kohler, who was savagely beaten by Polishburglars who broke into his west London home last year, was at the demonstration for a Channel 4 News programme and said he was depressed by the views of those on the march.

“I was drawn into the immigration debate and I wanted to come and see these people, hear their arguments and confront them,” he said. “It’s been sadly depressing. It’s lived up to all my worst fears.”

Many demonstrators held placards featuring Donald Trump, saying: “Trump is right” – a possible reference to the Republican candidate for the US presidential election’s controversial call for a halt on Muslim immigration to the US.