Armed militia has taken over a federal government building in Oregon in another land dispute. Cliven Bundy’s son has joined the militia

Ammon Bundy, son of Cliven Bundy, famous for his standoff against the federal government’s Bureau of Land Management (BLM) in eastern Nevada in 2014, has joined to support the militia and the current targets of BLM, Oregon rancher, Dwight Hammond, and his son, Steven.

The Hammonds set a controlled fire in 2001 to protect their ranch from wildfires and to stop the spread of juniper, an invasive evergreen that robs grazing land of water. The fire burnt 130 acres of BLM land. Both of the Hammonds were charged with arson, tried, and sentenced to five years in federal prison.

No doubt the federal government has gotten too big for its britches. To imprison good citizens for trying to take care of their property is beyond tyranny.

I just hope the whole episode ends peacefully, and in favor of the Hammonds, as it did in the Bundy case.

Armed anti-government protesters have taken over a building in a federal wildlife refuge in Oregon, accusing officials of unfairly punishing ranchers who refused to sell their land.

One of them is Ammon Bundy, the 40-year-old son of Nevada rancher Cliven Bundy, who is well-known for anti-government action.

He spoke by phone to CNN Sunday morning. Asked several times what he and those with him want, he answered in vague terms, saying that they want the federal government to restore the “people’s constitutional rights.”

“People need to be aware that we’ve become a system where government is actually claiming and using and defending people’s rights, and they are doing that against the people.” 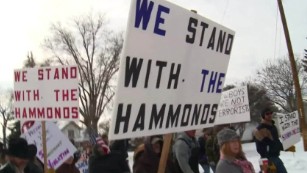 The group is occupying part of the Malheur National Wildlife Refuge near Burns after gathering outside for a demonstration supporting Dwight and Steven Hammond, father-and-son ranchers who were convicted of arson.

Prosecutors said the Hammonds set a fire that burned about 130 acres in 2001, to cover up poaching. They were sentenced to five years in prison.

The Hammonds, who are set to turn themselves in Monday afternoon, have said they set the fire to reduce the growth of invasive plants and to protect their property from wildfires, CNN affiliate KTVZ reported.

The Hammonds have been clear in that they don’t want help from the Bundy group.

“Neither Ammon Bundy nor anyone within his group/organization speak for the Hammond family,” the Hammonds’ attorney W. Alan Schroeder wrote to Harney County Sheriff David Ward.

CNN law enforcement analyst Art Roderick, a retired U.S. marshal who investigated anti-government militias for years, warned that Bundy’s call for supporters to join him might “turn into a bad situation.”

“What’s going to happen hopefully (is) … we don’t go out there with a big force, because that’s what they’re looking for,” he said. “The last thing we need is some type of confrontation.”

He said that over the years, law enforcement has learned how to handle a situation like this; one that hasn’t erupted in violence and in which a law may be broken, but there’s no immediate threat to anyone’s life.

The best approach now, Roderick said, is to wait the group out and to figure out how to bring a peaceful end to the standoff.