Oops! The walls are closing in on the wicked witch of Benghazi. Now that Hitlery has gracefully “accepted” (LOL!) a Congressional subpoena to testify before Trey Gowdy’s House Select Committee on Benghazi, government watchdogs are busy providing more nails for her political coffin, discovering lie after additional lie. Who knows how much more fodder they and other watchdogs will provide, in addition to Gowdy’s own investigation, before she is scheduled to testify in October.

So, what can Gowdy’s committee and Congress do beyond subpoenaing a witness and receiving testimony? How much prosecutorial power does Congress have? None, as far as I know. Someone correct me if I am wrong. They can investigate and issue subpoenas, but that is where Congressional authority ends. Any prosecution they pursue must be referred to the Attorney General. Good luck getting Loretta Lynch to prosecute Hillary.

At best, Gowdy’s efforts are likely to derail Hitlery’s presidential campaign, no small feat in itself, and that may very well be the reason for Gowdy’s carefully calculated timing of his issuance of Hillary’s subpoena. If Gowdy has her dumbstruck and tongue-tied on the hot seat, squirming in her chair and staring, as she almost always does, like a deer in the headlights, then only the most corruptible of idiots will vote for her. Granted, there are plenty of those around, but not nearly enough to win a presidential election, or even a primary, in my opinion. Go, Trey! 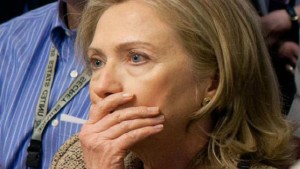 Documents released by a pair of government watchdogs Friday revealed additional inconsistencies in Hillary Clinton’s past defense of the private email account and server she used while secretary of state.

Reporters quickly seized on the inaccuracies, echoing a pattern that has plagued the early weeks of her campaign in which new information has prompted Clinton to make claims in her defense that the media later proves false or misleading.

Here are seven statements from the Clinton campaign that have since been debunked.

Documents from the State Department inspector general indicated the agency is presently storing all 33,000 of Clinton’s emails on a classified network.

Memos sent between the inspectors general of the State Department, the intelligence community and Patrick Kennedy, State’s top records official, show the watchdogs were concerned that the “secret” classification of the government network on which Clinton’s emails are being stored was not high enough to protect the content of the records.

Kennedy assured the inspectors general that emails found to warrant a higher classification level, such as “top secret,” would be moved onto a more secure server in a July 14 memo to State Dept. Inspector General Steve Linick.

Two weeks later, the pair of inspectors general raised concerns that “hundreds of potentially classified emails” were included in the records she turned over.

The process for reviewing Clinton’s emails was so unreliable that the watchdogs worried “that possible classified material will be posted” in an upcoming release of documents online.

“Several of these emails contained classified [intelligence community] information, though they were not marked as classified,” a July 17 memo said. “In addition, at least one of these emails has been released to the public and can be accessed on the Department’s FOIA website.”

Records published by the House Select Committee on Benghazi in June suggested Clinton encouraged Sidney Blumenthal, her former aide, to send her unvetted intelligence about Libya.

“It is significant our top diplomat was directly receiving unvetted intelligence information, which may have come from sources with financial interests in Libya,” said Rep. Trey Gowdy, chairman of the Benghazi committee, of the documents.

Clinton thanked the man she called an “old friend” for “keeping this stuff coming” after Blumenthal prepared a series of informal memos for the secretary.

Clinton welcomed his input on political developments in countries around the world.

Evidence of her reliance on Blumenthal as a major source of diplomatic guidance raised eyebrows given the fact that the Obama administration had forbidden her from hiring the divisive operative at State.

Clinton Foundation disclosed all foreign donations to the State Department while Clinton was secretary.

After foreign contributions to the Clinton Foundation became a stumbling block in Clinton’s path to Senate confirmation, the philanthropy struck a deal with the White House that included disclosing foreign donations to the State Department.

Subsequent reports indicated the foundation never revealed at least 1,100 donors to one of its components and failed to inform the State Department of a $500,000 donation from Algeria.

Foundation officials later admitted they should have disclosed the Algerian contribution before accepting it.

“I provided all my emails that could possibly be work-related.”

Clinton has repeatedly insisted that the 55,000 printed pages of emails she turned over to the State Department in December contained all of her government communications.

But after Blumenthal gave the Benghazi committee dozens of emails that the State Department had never provided, the agency was forced to admit the possibility that Clinton had withheld work-related documents.

In fact, after the State Department said it did not have all or part of 15 emails Blumenthal gave to Congress, it became clear that Clinton had indeed failed to turn over at least that many work-related emails.

The emails she edited or withheld contained passages that might have raised uncomfortable questions for her presidential campaign, such as information about oil companies that were jockeying for lucrative contracts in post-war Libya.

“I’ve never had a subpoena.”

Pressed on whether she had deleted email records that were subject to a subpoena, Clinton denied ever having received one.

But Gowdy quickly noted Clinton faced a subpoena from the Benghazi committee in March.

He said the House Oversight and Government Reform Committee also sent Clinton a subpoena before the select committee even existed.

In fact, Clinton had faced official requests for her emails as far back as 2013 — long before she reportedly deleted all of the emails on her server.

“I opted for convenience to use my personal email account … because I thought it would be easier to carry just one device.”

Clinton’s reason for constructing a private server to house her email records was quickly picked apart by reporters who identified several recent instances in which the presidential candidate had joked about carrying more than one device.

She had admitted to carrying both an iPhone and a Blackberry in February.

Emails that were published in May and June bore the stamp “sent from my iPad,” suggesting she may have handled the emails on a third device.

Clinton Foundation donor had no involvement in Uranium One deal that Clinton approved.

The Clinton campaign responded to the high-profile release of Clinton Cash by Peter Schweizer with a video disputing some of the book’s claims.

Among them was the suggestion that Clinton may have fostered a lucrative mining contract with a company called Uranium One because it benefited a major Clinton Foundation donor, Frank Giustra.

The campaign video called the book’s arguments “just dead wrong” and noted Giustra had already sold his stakes in the company by the time the deal was struck.

But Giustra’s firm remained Uranium One’s financial adviser well after he sold those stakes, casting doubt on assertions that he severed his ties to the company before Hillary Clinton became secretary of state.

What’s more, evidence suggests Bill Clinton was heavily involved in securing Giustra an overseas mining deal that set the stage for the 2010 Uranium One transaction.