Is that Sharpton I hear? ‘What’s wrong wit chu racist crackas? You can’t shoot a brutha fo stealin yo shoes!’

Oops! Bad day. Stealing the right shoes, at the right time, from the wrong guy, who had a conceal/carry permit and a loaded handgun, which he put to use in short order to protect his life and his property.

The 16-year old thug really needed a pair of the newest Air Jordans. He was just too late getting to the mall to ‘acquire’ a pair by other means. So, since he figured he needed the shoes more than the guy who was leaving the mall with a brand new pair, and since he had a loaded handgun, and since this guy was an easy target, it just all made sense. And he was right about everything EXCEPT the guy being an easy target. It seems his intended victim had a conceal/carry permit and a loaded firearm himself. After all, you can’t be too careful. You never know when you are going to find yourself in a situation like this.

So, how long will it take Little Al Sharpton to get to Cincy and whip the ghetto into a riotous frenzy?

‘You racist honkies can’t be shooting no brutha fo trying to steal yo shoes? I don’t care if the young brutha did have a loaded gun. Every brutha has a loaded gun! Dey has to has a gun, ’cause all da racist crackas be trying to kill them all da time. He probably just wanted to look at dem shoes. He never stole dem dam shoes! He didn’t touch dem dam shoes. And what does he git. He gits SHOT! We done had enough of the racist crackas and their expensive shoes. Dem shoes was Air Jordans, and Michael Jordan, last time I checked, is black as coal. Das right! The young brutha had more right to dem shoes than any racist cracka did! Enough is enough! We demand an all-black jury, a black judge, a black mob, some rope, and a big dam tree! We gwine to find some justice!’ 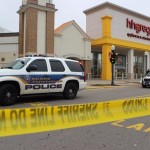 CINCINNATI — Police were studying mall surveillance video Tuesday in their investigation of the fatal shooting of a 16-year-old Ohio boy authorities say tried to rob a shopper in his quest to obtain popular, limited-edition athletic shoes.

Miami Township police said a man with a concealed weapon permit fired his gun after he and another man were accosted Saturday morning by three teens on a sidewalk outside the Dayton Mall. Police said one teen had showed a gun.

Jawaad Jabbar of Middletown died a short time later of a gunshot wound to his torso, authorities said.

Police said the two groups — the three teens and the two men — didn’t know each other, but had all had gone to the mall south of Dayton for Nike Air Jordan sales offered by multiple stores.

Police Chief Ronald Hess said Tuesday the stores had set up systems to avoid long, tense lines that have led to problems elsewhere when the popular brand has released new versions, and the three Middletown teens apparently missed out.

Police said the teens were outside on a sidewalk when the two men left the mall carrying newly bought shoes.

“They did have the boxes from the stores that were having the limited-edition sales,” Hess told The Associated Press on Tuesday. Police said Jabbar displayed a gun and demanded their merchandise, then the man with the concealed weapon permit pulled out his gun and shot him. No one else was injured.

The other two teens remained held in juvenile detention while the investigation continues. Police haven’t released the identity of the man who fired the shot, and are still investigating his actions.

“We’ll review the whole case with the county prosecutor, and if they determine he violated some law, then yes (he could be charged),” Hess said. There was no estimate on how long the investigation would take, he said.

Jabbar’s father, Wallace Jabbar, told The Hamilton-Middletown Journal-News in a brief telephone call Monday evening that he was “obviously devastated” and has been out of town working. The newspaper said Jabbar’s mother declined to comment.

Jawaad Jabbar was a student and athlete at Middletown High School, which is on holiday break.

The Nike shoes named for retired basketball superstar Michael Jordan are prized by both athletes and collectors, and entrepreneurs often sell shoes bought for around $200 at double that or more online.