For all those who actually fell for the line that the “Affordable Care Act,” i.e. Obamacare, was the altruistic act of a benevolent government, consider the following points and real life effects of government interference in commerce….

The slice of Bizarroworld we know as Obamacare is summed up nicely in the video, below, by North Carolina congresswoman Renee Ellmers, who was questioning Kathleen Sebelius, Secretary of Health and Human Services, on Obamacare and the forced mandates requiring consumers to purchase insurance they have no use for, such as maternity coverage for young single males.

You just can’t make this stuff up, folks….

A gentle reminder from the IRS to Mr. and Mrs. Miller….

“Thanks Obama for the fine for not having insurance.

So got a nice little fine. 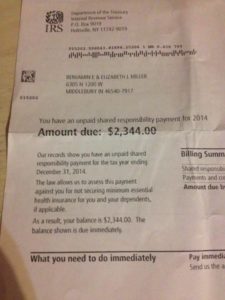