When Grant Berardo, a junior at Wall Township High School in Wall, New Jersey, recently opened his yearbook, he noticed something different about the T-shirt he was wearing in his school photo.

The “TRUMP: Make America Great Again” lettering on his shirt had been digitally removed, according to CNN. “He was disappointed. This was the first election he has been interested in,” said Grant’s father, Joseph Berardo.

Now the school is facing accusations of censorship, a teacher has been suspended and the parents of three students are looking for answers — and new yearbooks.

I want the yearbooks to be reissued and I want a letter from the administration explaining why they are reissuing the yearbook,” Joseph Berardo said.

Before the high school’s picture day last fall, Berardo said he and his wife talked to Grant about wearing the shirt and agreed that “as long as the shirt didn’t have drugs or alcohol on it was fine.” When the Berardos got the photo proofs in November, the Trump logo was there and they approved use of the photo in the yearbook.

But when the yearbooks were released this spring, the TRUMP logo was gone. And Grant’s wasn’t the only student’s photo to be altered.

A Donald Trump logo also was missing from junior Wyatt Dobrovich-Fago’s vest. And a quote by Trump was removed from his sister Montana’s freshman class president photo. 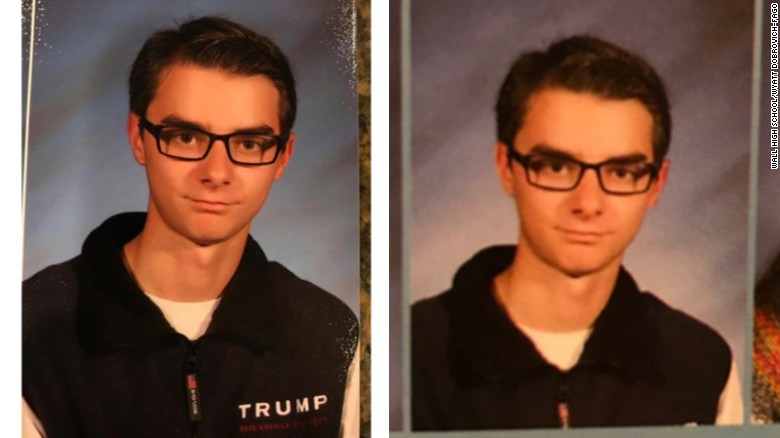 Montana had submitted the Trump quote, “I like thinking big. If you are going to be thinking anything, you might as well think big,” to appear underneath her photo.

“I want to know who thought it was okay to do this,” said Janet Dobrovich-Fago, the teens’ mother. “I want the school to seek disciplinary action and to be held accountable.”

A teacher who advised the yearbook staff has been suspended pending the result of an investigation, Wall Township Public Schools Superintendent Cheryl Dyer said Monday. She did not identify the teacher.

Dyer had sent a letter to parents on Friday, saying she was investigating the matter.

“There is nothing in our student dress code that would prevent a student from expressing his or her political views and support for a candidate for political office via appropriate clothing. Rather, I applaud students for becoming involved in politics and for participation in our democratic society,” she wrote.

“The high school administration was not aware of and does not condone any censorship of political views on the part of our students. This includes statements that they might make or clothing with references to candidates for public office that they might wear.”

The school’s dress code does prohibit references to illegal activity such as use of drugs, alcohol or weapons, she noted. 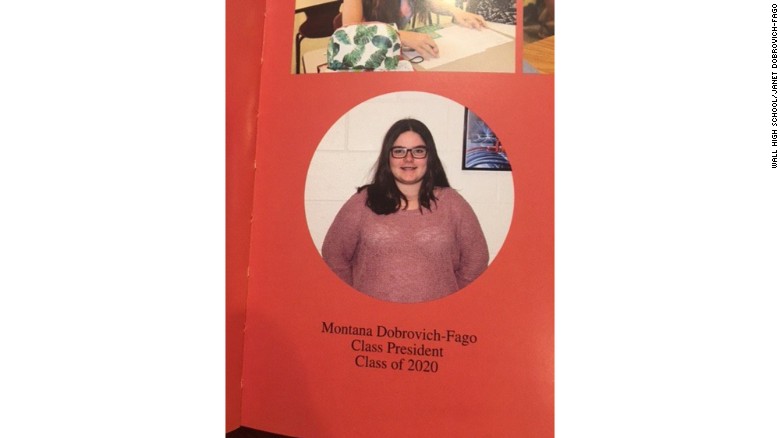 Montana Dobrovich-Fago had requested a quote from Trump be printed under her yearbook photo.

Both the Berardos and the Dobrovich-Fagos want the school to issue new yearbooks with the original photos and quotes.

“There is an opportunity to use this as a teaching moment for the kids, and for the teachers as well,” Joseph Berardo said. “This is a First Amendment, freedom of speech issue.”

In a statement released June 10, Dyer said the school district’s staffers “strongly value the principles of free speech and inquiry in our schools and society, viewing them as the bedrock upon which our community and educational system is built. The allegations referenced above are disturbing, and any inappropriate challenge to these principles will be rectified as swiftly and thoroughly as possible.”