I am one of Newt Gingrich’s biggest fans, but I disagree with him on so many levels on the latest Donald sensation/artificial crisis. Newt, above anyone else, should understand what is going on here 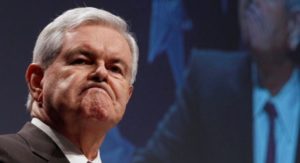 Disappointing. That is the best word I can come up with for New Gingrich’s latest “counseling” of Donald Trump.

The Dems see blood in the water as the media excoriates The Donald over his treatment of the poor Muslim couple who exploited their son’s death to advance the liberal agenda of letting every unvetted Muslim into the country. I reckon we haven’t lost enough innocent lives yet.

Newt, you are wrong! You are wrong for attacking, even if it is a mild attack, the Republican nominee for President of the United States. Your criticism of Donald Trump is helping one person – the Wicked Witch of Benghazi. Good job, Mr. Speaker!

You are wrong about John McCain and Paul Ryan. Both are self-serving scumbags!

But, mostly you are wrong because you have been in The Donald’s shoes before. Look, we who have been political geeks for a long time recognize what is happening here. The traitors Democrats have gone all-in on the Genghis Kahn offensive. They are throwing the kitchen sink at this, you know, like they did at you back in the day.

Remember that, Newt, when the Democrats and their official communications division, the mainstream media, diced you into tiny pieces and sent you to the land of the political irrelevant, from which you have yet to return?

That was fun, huh? Never mind that the story was all hype and misinformation and 24/7 full frontal attack from the dishonest media. You were flayed publicly. You knew what was happening. I did. You just couldn’t prevent it.

It seems like such traumatic treatment would be fresh on a man’s mind for a long, long time. But, instead of consoling and privately advising Trump based upon your same experience, you PUBLICLY pile on. Really? No damned wonder Trump didn’t choose you for #2. You’re as loyal as a rattlesnake.

Newt Gingrich lofted sports and entertainment analogies Wednesday about Donald Trump, striking the chord of a coach trying to get his star player out of a vicious slump.

Appearing on Fox Business’ “Mornings with Maria Bartiromo,” the former speaker said no less than three times that the GOP nominee needs to “slow down and take a deep breath.”

Gingrich gently chided Trump for unforced errors the past week that have been “self-destructive.”

“Trump is still behaving as though it was the primaries with 17 candidates. He has not made the transition to being the potential president of the United States, which is a much tougher league,” Gingrich said on the show.

“He is not yet performing at the level that you need to. … He’s thrown a series of interceptions last week that do not bode well for his campaign.”

Gingrich didn’t mention by name Trump’s public sparring with Khizr Khan, a Gold Star Muslim, but he did reference Trump’s refusal to endorse John McCain and Paul Ryan for their state primaries.

“Let me say this flatly: I am totally for John McCain; he is a great war hero and a terrific human being who has worked very hard for veterans,” Gingrich said.

“And I’m totally for Paul Ryan, who is the heart of the House Republican Party and probably the most problem-solving leader we have had in Congress on the Republican side in the last 20 years, so I think some of what Trump has done is just very self-destructive.”