UPDATE: Video of the Munich massacre, which we can now call the Muslim Munich massacre. Terrorists were shouting, “Allahu Akbar” and “long live Osama”

UPDATE (7/23/2016, 3PM EST): Was there ever a doubt that the terrorists in Munich were murdering on behalf of Islam?

Also, live video, below, of the actual shooting at the McDonald’s in Munich where a reported three or more assailants murdered nine innocent people, many of them children.

The woman continues on to say "I heard him say Allahu Akbar" twice in fact. CNN refused to air the entirety of the interview.

Ten dead, over 20 wounded in a terrorist attack at a McDonald’s in Munich. The terrorist was targeting children.

“Where will it end,” asks Allie Hodgkins-Brown. I can tell you where it will end . One of two places….

The assailant was targeting children outside a McDonald’s restaurant. He was successful in murdering many.

The mass murdering cockroach has been identified as an 18-year old German citizen of Iranian descent. Imagine that! 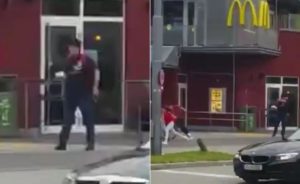 In the photos, above, the assailant can be seen on the left. In the right
photo, a young girl in a red T-shirt can be seen running for her life. 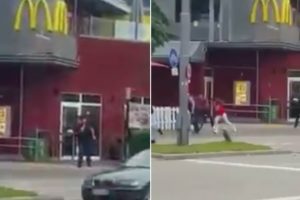 The assailant can been seen searching for targets in the left photo,
under McDonalds’ golden arches. In the right photo, the girl in the
red T-shirt is seen again running for her life. Note the picket fence. 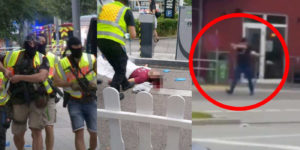 In the center photo, above, the girl in the red T-shirt can be seen,
covered with a blanket by emergency personnel, after being shot.

The woman continues on to say "I heard him say Allahu Akbar" twice in fact. CNN refused to air the entirety of the interview.

AP reports that survivors of the attack described terrifying scenes:

“We entered McDonald’s to eat… then there was panic, and people ran out,” one woman told Bavarian public television.

She said she heard three gunshots, “children were crying, people rushed to the exit in panic”.

A man who said he worked at one of the shops in the mall, described how he came face-to-face with the shooter.

“I looked towards him, he fired at two people and I fled the building by climbing a wall.

“And then I saw bodies and injured people,” he said.