ISIS is dying and taking as many innocent souls with them as possible, in the most gruesome ways

ISIS appears to be on its last legs, and is wasting no time executing anyone and everyone they suspect of the slightest transgression. They even burned a two-year old girl alive. What could she have possibly done to the religion of peace?

Excerpted from Britian’s Sunday Express…. “PARANOID Islamic State (ISIS) maniacs have embarked on a summer of slaughter, beheading 23 teenagers on suspicion of spying and burning a two-year-old girl alive. 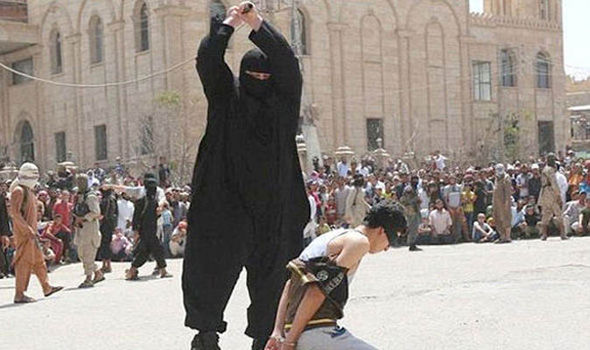 The group is known for its barbaric forms of execution.

The twisted jihadis have carried out some of their most gruesome killings yet, including executing four football players in front of a crowd of children and butchering 25 civilians by dissolving them alive in acid.
take our poll - story continues below

Senior military sources said the spate of horrific murders was a sign that the Islamist fanatics are growing increasingly desperate as they face all-out military defeat.

The terror group is clinging on to its last few strongholds in Syria and Iraq, with allied forces assembling for a blitz offensive to finally obliterate them.

Today a senior Iraqi army officer revealed details of the latest sickening war crimes, which involved ISIS maniacs rounding up 23 innocent teenagers in the city of Mosul and beheading them in front of baying crowds.

The paranoid militants have killed people on suspicion of being spies
Brigadier-General Abdul-Karim Sabawi said: ‘ISIS arrested 23 young men from Nimrod and al-Salamiya and beheaded them.

‘The deceased were accused of collaboration with the security forces and providing them with important information about the outfit’s movement in Nimrod.

“This heinous crime comes after preparations to liberate Mosul from ISIS control is almost completed.’

ISIS has significantly ramped up executions for spying in recent weeks as desperate jihadis go to ever more crazed lengths to stem the huge losses they are suffering.

One of those killed was a two-year-old girl
The jihadi group is fast losing territory in Iraq and Syria
They are believed to have executed more than 100 people for espionage this week alone, with the vast majority of the killings coming in the form of public beheadings. ….
In addition to the execution of the teens, ISIS also executed another 33 civilians in the nearby Qayyara district this week, according to AhlulBayt News Agency which cited a senior military officer.

In recent days the sick jihadis also beheaded four footballers from Raqqa, in Syria, in front of a crowd of children after accusing them of spying.

And in their most twisted execution to date they killed 25 Mosul civilians by dissolving their live bodies in a pool of nitric acid for the same crime.”