Welcome to the future. Milwaukee explodes in anti-white violence. “Yeah they white, get their ass!” “He white – beat his head -bitch!” 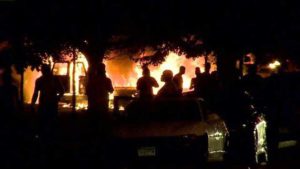 Welcome to Barack Hussein’s dream – blacks attacking whites, total chaos, all in an effort to appease the black community even more.

For all of you who voted for Barack Hussein, I hope you are happy. Especially if you are white.

Milwaukee exploded in anti-white violence this weekend. Dear God, help us all!

The clip shows angry rioters chanting “black power!” before asking “is they white?” as cars slowly drive past.

“Yeah they white!” states someone else, prompting the mob to run towards the vehicle.

“Yeah they white, get their ass!” screams another.

“Hey they beatin’ up every white person!” exclaims another rioter.

The footage appears to show the mob attacking cars and trying to drag out the drivers.

The footage then cuts to an upper floor window before the person shooting the video states, “I think they just beat some white bitch ass for no reason – they bust open the window.”

#BlackLivesMatter rioters target whites: "They beating up all the white people." #Milwaukee pic.twitter.com/G85jnYtd3k

And in the following twitter video, a black protester complains, “The rich people, they got all this money, and they not, like, you know, trying to give us none.”

Rich people not giving us money so we burn down our own neighborhoods. #BlackLivesMatter logic. #Milwaukee pic.twitter.com/Nc9z9JGZJF