Michael Moore, aka Jabba the Hutt, has embarked on a personal crusade to screw with Donald Trump and shut down his facebook page

Michael Moore, the poster blob for the ever-so-tolerant leftist loons, is expending much effort and many calories in his personal mission to destroy Donald Trump’s presidential aspirations. He is working so hard he has to eat 4 combo grande pizzas an hour to maintain his famous physique.

Trump is an obsession with Moore. Sounds like a man crush! His every waking hour is devoted to protesting Trump on general principle at every Trump event he can attend. His most recent campaign is to encourage liberal weenies to complain to facebook about Trump on the grounds of “hate speech,” in an effort to convince facebook to disable Trump’s facebook page. Of course the hate speech that Moore is directing towards Trump is fine, as he is a progressive poontang, which exempts him from the charge of “hate speech.”

Apparently Jabba is unfamiliar with the history of those who visit discomfort upon The Donald. They typically suffer tenfold the pain they directed towards Trump, and are duly dispatched to the barren desert of obscurity (may the political careers of Trump-haters Lindsey Graham, Rick Perry, Bobby Jindal, Jeb Bush, and George Pataki rest in peace). 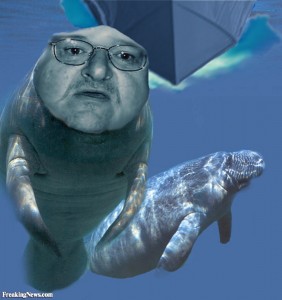 Michael Moore, at home in the Everglades

Leftwing filmmaker Michael Moore is asking his followers to report Donald Trump for using “hate speech” on Facebook, in hopes of getting the GOP frontrunner banned from the social media site.

“Facebook prohibits all its users from using hate speech on its site (‘You will not post content that is hate speech’),” wrote Moore in a detailed post on Wednesday. “I’m joining others today in filing a complaint with Facebook that Trump’s Facebook page is using hate speech to promote racism and bigotry.”

Moore added: “Please file your complaint, too. Here’s how: Go to Trump’s pagefacebook.com/DonaldTrump. Click ‘Report’. Then click ‘It shouldn’t be on FB’. Then click ‘Hate Speech’. Then click either ‘race or ethnicity’ or ‘religious group’. That’s it. Let’s get a few million doing this by the end of the day!”

The New York Daily News reported this week that despite an online campaign to censor Trump, his posts are protected under Facebook’s community standards:

Facebook’s policy does highlight that any hate speech content attacking people on their race, ethnicity, religious affiliation or national origin will be removed. However, Trump’s posts could potentially be protected by another rule under Facebook’s community standards: “Facebook can be used to challenge ideas, institutions, and practices. Such discussion can promote debate and greater understanding.

Moore tweeted his “team” was outside the hotel:

My team is down at the Trump Protest in NYC today. The Donald is having a fundraiser at the Plaza Hotel. Standby for updates. #DumpTrump

LIVE on #Periscope: LIVE From the TRUMP PROTEST in NYC today outside Plaza Hotel. Donald arriving soon… (via @jas… https://t.co/IqPlwUAbAa