I have received a ton of mail (since it is electronic mail I suppose it is not actually a ton, but many, many megabytes) in response to Special Forces sniper Bryan Sikes’ letter to Michael Moore, which you can find here…. Bryan’s letter to the Crisco Kid

One gentleman, while admitting “I have not served,” (BINGO!), lambasted Bryan for speaking his mind, calling his comments “unseemly” and “I thusly confess myself disappointed in your conduct.” His caustic language didn’t stop there, as he went on to accuse Bryan of not having been taught proper values. Just WOW!

My reply to him: “I believe your tactless reply is intellectually void and the result of you having never served. If you had you would understand. To risk your life for others and be branded a coward is hard to take. While Bryan and all of us who have worn the uniform defend Mr. Moore’s right to say anything he likes, we certainly don’t have to like it. By the way, that First Amendment we hold so precious and have defended with our lives applies to us too.”

Among my favorites is this thoughtful reply from Tracey P, Houston, Texas….

You have shown the American people how uneducated you are, and what an idiot you really are! You should be ashamed of yourself. You are a disgrace!

The statement you made about our SNIPERS being cowards is completely wrong of you and in reality, you are the COWARD! You sit behind your desk and have other people at your beck-n-call and make deals to make your money. You have NO idea what our MILITARY AGENCIES actually do and what they go through and the conditions that they have to live in when they deploy. You have know idea what it is like being on the front line, in hostile environments and to fight in a war or in peacekeeping missions. You have no idea what it is like to be in a third world country and the conditions that not just our MILITARY must endure but the innocent people that have no RIGHTS because of terrorists, extremists, rebels and organized crime that have joined together and are all terrorists now.

I have lived, worked and volunteered in many countries including third world countries and it’s not fun and games and it’s unpleasant and I would do it again and again because I to do it for the RIGHT reasons. I care about what our MILITARY and SNIPERS do and why they do it, just like what I do and for humanity. I hold four degrees and founded a non-profit organization that helps in many different areas and I can honestly tell you that we all aren’t as rich as you but what our MILITARY, myself and other organizations do make us richer in so many ways, ways that you will never understand or appreciate!!!!!

THANK YOU MR. SIKES FOR TAKING THE TIME TO WRITE THAT LETTER TO MICHAEL MOORE! YOU ALL DESERVE A MEDAL AND AN AWARD! I SALUTE YOU ALL AND THANK YOU FROM THE BOTTOM OF MY HEART! YOU ARE ALL IN MY THOUGHTS AND PRAYERS ON A DAILY BASIS. YOU ALL WILL NEVER BE FORGOTTEN. YOU ARE ALL HEROES!!! GOD BLESS EACH AND EVERY ONE OF YOU!!! 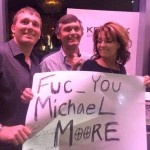