Jeff Sessions fires Andrew McCabe two days before his official retirement, denying him big pension dollars, which may be the least of McCabe’s worries

A shot over the bow of the USS Clinton!

Administering a much-needed greasing to the wheels of justice, Jeff Sessions found a pair and has fired FBI Deputy Director Andrew McCabe after a lengthy investigation by the FBI’s Office of Professional Responsibility.

McCabe, the former deputy director of the FBI and a frequent target of President Donald Trump, was fired Friday, days before his formal retirement, according to Yahoo News. The firing of McCabe, a civil servant who has been at the bureau for more than two decades, could significantly affect his pension.

Remember, it was McCabe who famously declared loudly to all those attending an invitation-only gathering, “Fuck Flynn and then we fuck Trump!” McCabe hated Flynn and is reported to be the source of General Flynn’s many problems with the FBI. 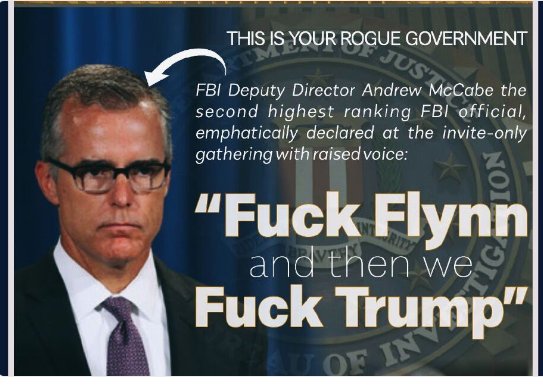 Attorney General Jeff Sessions made the decision to oust McCabe after the FBI’s Office of Professional Responsibility recommended he be fired for his alleged lack of candor during an internal review of how the FBI and Justice Department handled an investigation into the Clinton Foundation. McCabe and his attorney met Thursday with Scott Schools, the highest-ranking career employee of the Justice Department, in an attempt to prevent the firing or at least save his ability to begin collecting a pension estimated at $60,000 a year.

McCabe, a lifelong Republican, had officially stepped down from his post in late January but was using accrued leave to stay on the FBI’s payroll until his retirement date on Sunday, his 50th birthday. Being fired before his birthday means he’d have to wait several more years before he can draw a pension.

“After an extensive and fair investigation and according to Department of Justice procedure, the Department’s Office of the Inspector General (OIG) provided its report on allegations of misconduct by Andrew McCabe to the FBI’s Office of Professional Responsibility (OPR).

“The FBI’s OPR then reviewed the report and underlying documents and issued a disciplinary proposal recommending the dismissal of Mr. McCabe. Both the OIG and FBI OPR reports concluded that Mr. McCabe had made an unauthorized disclosure to the news media and lacked candor ― including under oath ― on multiple occasions.

The FBI expects every employee to adhere to the highest standards of honesty, integrity, and accountability. As the OPR proposal stated, “all FBI employees know that lacking candor under oath results in dismissal and that our integrity is our brand.”

Pursuant to Department Order 1202, and based on the report of the Inspector General, the findings of the FBI Office of Professional Responsibility, and the recommendation of the Department’s senior career official, I have terminated the employment of Andrew McCabe effective immediately.

McCabe responded to the firing in a lengthy statement.

“The investigation by the Justice Department’s Office of Inspector General (OIG) has to be understood in the context of the attacks on my credibility,” McCabe wrote.

The investigation flows from my attempt to explain the FBI’s involvement and my supervision of investigations involving Hillary Clinton. I was being portrayed in the media over and over as a political partisan, accused of closing down investigations under political pressure. The FBI was portrayed as caving under that pressure, and making decisions for political rather than law enforcement purposes. Nothing was further from the truth. In fact, this entire investigation stems from my efforts, fully authorized under FBI rules, to set the record straight on behalf of the Bureau, and to make clear that we were continuing an investigation that people in DOJ opposed.

McCabe had been with the bureau since 1996 and served a short stint as the acting FBI director after President Donald Trump fired former FBI Director James Comey last May. After the U.S. Senate confirmed Christopher Wray as the bureau chief, McCabe returned to his original role as deputy director.

McCabe abruptly announced he was leaving the bureau at the end of January while tangled in an internal investigation of his handling of the FBI investigations into Hillary Clinton. The Justice Department’s inspector general has been investigating how officials handled the Clinton investigation since just before Trump took office.

While Trump has accused McCabe of having a political bias in favor of Clinton, the Justice Department’s forthcoming internal review suggests he may have actually authorized the disclosure of information that was damaging to the Clinton campaign.

The report evidently says that McCabe authorized a discussion involving one of his top aides, the FBI’s chief spokesman and a Wall Street Journal reporter for a story, published Oct. 30, 2016, that included details of McCabe pushing back on Obama appointees in the Justice Department to continue an FBI investigation into the Clinton Foundation.

McCabe has been at odds with Trump in recent months, with the president apparently trying to undermine McCabe and the FBI’s credibility.

In December, Trump publicly complained about McCabe’s wife’s political affiliations (Jill McCabe unsuccessfully ran as a Democrat for a Virginia state Senate seat in 2015), criticized his oversight of the FBI investigations into Clinton and even mocked his retirement plans.

How can FBI Deputy Director Andrew McCabe, the man in charge, along with leakin’ James Comey, of the Phony Hillary Clinton investigation (including her 33,000 illegally deleted emails) be given $700,000 for wife’s campaign by Clinton Puppets during investigation?