Mark Levin is a douchebag! His latest sensational grab for publicity is calling Donald Trump names because Trump wants Putin to release more Hitlery emails. Hell, I want that too. GFY, Levin! 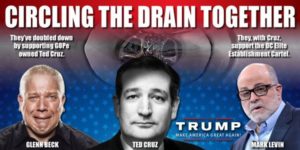 Puffed-up, perpetually pissed off faux conservative Mark Levin continues to talk down to Donald Trump, most recently over the Hitlery email disaster, all in an apparent effort to pump himself up and show what a badass he is. Two words for you, Levin. The first one starts with F. The second one ends with U!

Levin’s claim to fame is an obscure radio show and a book 17 people have read. Just who the hell do you think you are, Levin, to be instructing a presidential candidate, who is also a celebrity, a billionaire, and, frankly, the one American Vladimir Putin admires and respects greatly, on ANYTHING!? The Cold War is over. Get used to it. Look for another boogeyman. Try Iran, huh?

“He thinks this is funny,” complains Levin. If you really think about it, Mark, this IS funny. It is funny as hell! The Democrats are running around like so many headless chickens, and they are in 24/7 “damage control.” THAT is funny!

Putin did something your sorry ass couldn’t do, Levin. He exposed the DNC and the Wicked Witch of Benghazi as complicit co-conspirators in the manipulation of an American election. Donald Trump is cheering Putin on, and who do you malign? Not the guilty parties in the corrupt conspiracy. No, you take the time to hammer the guy who is cheering on the whistleblower who brought all of this into the open for the American people to see. Feeling like shit yet, Levin? You should be!

Levin isn’t worthy of carrying Trump’s luggage. He has been all-Cruz-all-the-time since the beginning, dissing The Donald at every turn. Too bad for the radio show host with the voice of a third-grader that the peoples’ choice was and is Donald Trump. Suck it, Cruzbot! Go pout with the other losers. Start your own losers club. Just go the hell away! It is a new world, Levin. It has apparently left you behind. Catch up or go away. Sorry, their isn’t a third option.

Donald Trump and the “pseudo-conservative” media are treating the GOP presidential nominee’s invitation to Russia to track down Hillary Clinton’s emails as a “joke” — but the consequences aren’t funny, radio host Mark Levin says.

In a segment on the Wednesday edition of “The Mark Levin Show,” the conservative host said he thinks the remark “probably is a joke,” but asks, “is it a joke that should be made by a presidential candidate?”

Levin also blasted “the Rockettes and the pom-pom boys and girls in the pseudo conservative media,” as well as Trump supporter Newt Gingrich for propping up the excuse.

“I’m an American first,” Levin concludes. “Russia is not a joke, Vladimir Putin is not a joke . . . He’s to be taken seriously. Russia is an enemy. Putin is a very dangerous man.

“The lounge act sends a message to the enemy: ‘He thinks this is funny.'”