This debate is going to be more fun than the Super Bowl! Donald Trump is seating Slick Willie’s longtime hose, Gennifer Flowers, in the front row

It is possible to be a complete moron and make a billion dollars. Mark Cuban, who supports Hitlery Clinton for president, is living proof!

Cuban has agreed to take a seat in the front row of Monday night’s presidential debate to intimidate Donald Trump and throw him off his game.

Right, Cuban! Just who the hell do you think you are? Donald Trump was destroying punks like you when he was cutting his teeth on the tough streets of New York. The only thing you are going to accomplish is making a total ass of yourself for backing the Wicked Witch of Benghazi.

But, not to worry, Mark, The Donald has a treat in store for you. He has offered longtime Slick Willie mistress Gennifer Flowers a seat in the front row to keep you company and to stare down the Wicked Witch. And Gennifer has graciously accepted.

It was my hope that Trump would give front row seats to the families of the Benghazi Four so that Hitlery would have to see their haunting faces all night, and so that they could personally tell you just what level of scum you have devolved to. (continued below)

Right, Mark. Monica Lewinsky’s ex-boyfriend’s wife will be lucky to make it ten minutes without a coughing fit, her eyes going haywire, and/or completely passing out. This isn’t one of her ten-minute shrieks to high school students forced to assemble in the gym to make it look like she has support.

If dopey Mark Cuban of failed Benefactor fame wants to sit in the front row, perhaps I will put Gennifer Flowers right alongside of him!

Hi Donald. You know I'm in your corner and will definitely be at the debate!…💋 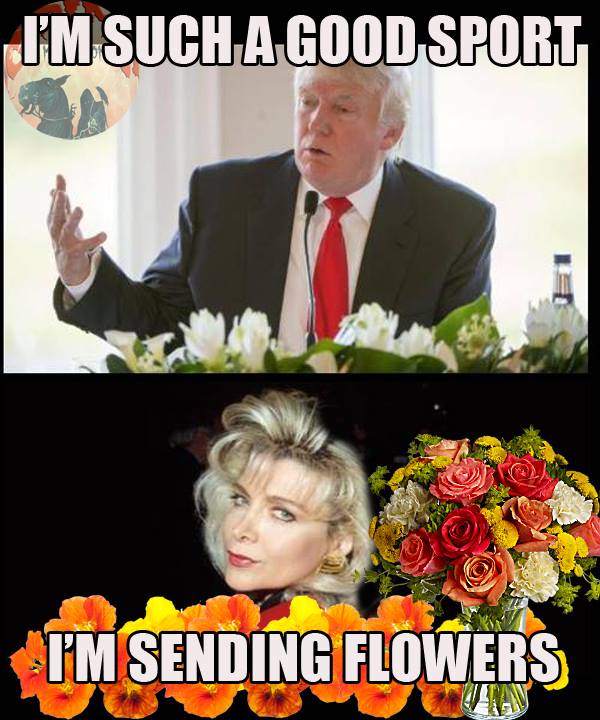