Wow! If you can turn Louis Farakhan into a star-spangled patriot, you have it going on. Donald “The Unifier” Trump, has done exactly that!

In a recent interview by Alex Jones of Infowars, Louis Farakhan shocks the world with his pro-Trump position on unvetted Muslims being permitted to freely immigrate to the United States.

I still cannot comprehend why anyone would be against such a common sense measure to insure the peace and domestic tranquility Americans deserve. However, the entire left, which Farakhan is now at odds with, is resisting the proposal with all its might, which, thankfully, is weakening by the day. 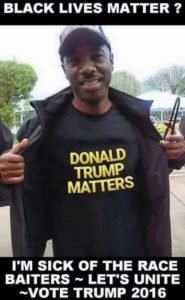 The Republican frontrunner’s plan, which called for a temporary halt on Muslim immigration until refugees could be properly vetted, led to over half a million UK citizens signing a petition to ban Trump from entering the country.

However, in an exclusive interview with Alex Jones, Farrakhan said that Trump was “wise” to call for such measures.

Farrakhan drew attention to the Obama administration’s disastrous policy of arming jihadists in Libya and Syria, noting that the blowback had, “created a refugee crisis that is destabilizing the countries in Europe.”

“So when Mr. Trump said we can’t allow these Muslim refugees into America, a lot of people were upset with him, but I know the hatred for America in the Muslim world is building,” said Farrakhan, adding that U.S. foreign policy had united Islamists against the west.

“So in this way I think Mr. Trump is wise to vet anyone coming from that area into America because the hatred for America is in the streets now,” asserted Farrakhan, adding that if the U.S. wasn’t careful about the vetting process, it might be inviting its own “destruction”.

Farrakhan put Trump’s success in the polls down to a heightened environment of political correctness that has caused frustration amongst white people who can’t say what they really feel.
“Mr Trump says ‘to heck with that’ – I’ll tell you what’s really on my mind and that is freeing a lot of people that like what he’s doing,” said Farrakhan.
The Nation of Islam leader went on to compare establishment politicians to prostitutes.

“They parade themselves before rich and powerful people to get money apparently for their ideas that the rich agree with, but the moment that they become what they’re looking to become they find that the rich have an agenda for them, that the rich have something to ask of them like the john asks of the prostitute,” said Farrakhan, adding that he admired Trump because, “he told them all – I don’t want your money.”

“And when a politician does not want money from the rich, he’s freer than the others to really do good for the masses of the people, and I think that today we’re in the midst of the darkest hour in American history and so if we don’t make the right move with the right people at the right time, the America that we know we’re not going to see it become great again,” concluded Farrakhan.