Landlord tells Harvard student to move after her terrified roommates, triggered by her MAGA hat, searched her room, finding a legal gun

Among America’s greatest, though little-recognized problems is the fact that Washington is brimming with liberal weenies with Ivy League degrees, the same Ivy League that indoctrinates perfectly normal, healthy, impressionable youngsters with leftist, Marxist, Utopian ideology that has failed miserably everywhere on the planet it has been attempted.

So, where else would you expect to find a story of a conservative student who somehow resisted and rejected her progressive indoctrination, proudly donning a MAGA hat and keeping a loaded, legal firearm in her bedroom for protection, being ostracized by her successfully indoctrinated liberal weenie roommates?

Such is the situation Leyla Pirnie, 24, a Harvard grad student, found herself in. Triggered by her MAGA hat and Alabama roots, her roommates waited for her to leave, then rifled through her personal belongings until they found what they were certain was there, a GUN! I can see them all now, clinging to one another in a cluster, weeping uncontrollably.

In addition to invading Pirnie’s privacy, for which her roomies saw no need to apologize, they all demanded, as did the landlord, that she move out, as she is obviously an extremely dangerous individual, what with a MAGA hat and a gun. 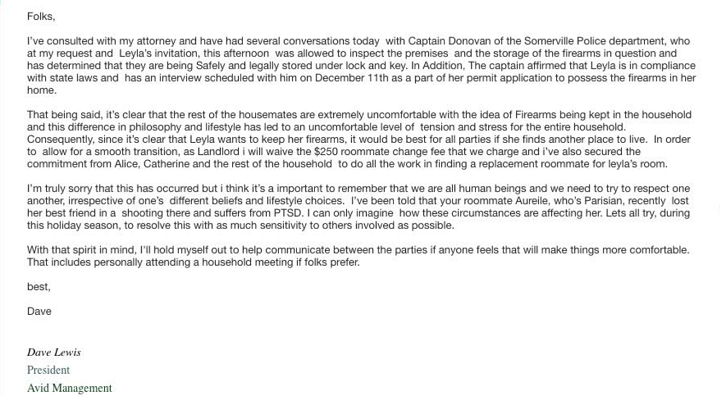 As reported by The Washington Free Beacon, Pirnie remarked, “When I asked them why they were in my room to begin with, they each came up with completely contradicting stories (none of which made any sense), but one comment struck me in particular: ‘We saw that you had a MAGA hat and come on, you’re from Alabama… so we just kind of assumed that you had something,'” she said. “I asked why they didn’t just call me and ask me before intruding. One of the girls responded that fear took over her body and she felt compelled to search my room until she found proof… I cannot make this up.”

In an email to the local police chief asking that he come to the residence to inspect Pirnie’s guns, one of her distraught roommates sniveled, “We discussed with Leyla that all of us are uncomfortable with having firearms in the house, and that their presence causes anxiety and deprives us of the quiet enjoyment of the premise to which we are entitled.”

The Ivy League Liberal Factory is one major thing wrong with America. She should sue the landlord for mental anguish and her roomies for invasion of privacy. They should be thrilled to live with someone who can actually stop an intruder while they hide under their beds.

BS! The girl had no obligation whatsoever to disclose that she had a gun. She should tell her heavy roommate that fat people creep her out and fatty needs to move, then tell her other roommate that people who wear glasses make her nervous, so Miss Foureyes has to move too.

Someone who knows her roommates are insane.