Newest poll from Gravis has Donald Trump extending his lead in Indiana. The Donald leads The Canadian 44% to 27% 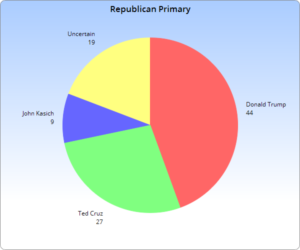 The Gravis poll began by asking 379 Republican Primary voters whom 91 percent indicated they were likely to vote in the upcoming primary and six percent stating they have already voted, “Assuming you had to vote today, which 2016 GOP Candidate would you vote for?” With three candidates remaining on the ballot, front runner Donald Trump received 44 percent support from Hoosier State Republican and Independent voters that took place in the survey. Texas Senator Ted Cruz received 27 percent of the vote while John Kasich, the Governor of Ohio received the support of 9 percent of those surveyed. At the conclusion of data collection, 19 percent indicated they were still ‘uncertain’ as to which GOP candidate they’d select.

Heading into Indiana’s Presidential Primary, Donald Trump holds 996 GOP delegates, with 517 still up for grabs. Indiana’s primary For Republicans, of those 57 delegates, 27 are a-large, awarded to the candidate who wins more votes statewide. Twenty-seven are awarded to the person who wins in each of the state’s congressional districts. Three are “party” candidates – Republican party officials. The delegates are pledged to their candidate for only the first ballot at the GOP convention this summer.

Unlike many other professional pollsters, Gravis Marketing’s polling surveys are always customized to receive the most accurate data for each voting demographic. The inclusion of political phone calls, web-based panels, and direct telephone calls to landlines and cell phone users allows Gravis Marketing, who has quickly become one of the leading political direct mail firms in the United States; to gather accurate data in their surveys.