Ever hear of Kim Rhode? Yeah, I didn’t think so. She is invisibly rewriting Olympic history 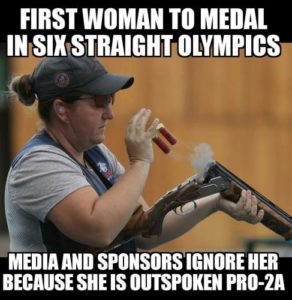 Kim Rhode is the first athlete ever to medal in six straight Olympic games. She is also the first Olympic athlete to medal on five continents.

Kim has been rewriting the record book since she was seventeen, becoming the youngest shooting competitor ever to win an Olympic gold medal, a feat she accomplished in Atlanta in 1996.

It is unlikely, however, that you will be hearing about Kim’s record-breaking performances from the uber-liberal Alphabet Network Club. You see, Kim is a steadfast supporter of the Second Amendment, which has no place in a warm and fuzzy liberal agenda-driven story.

NBC, did, however, take the time to cover Kim’s performance, and to diminish her accomplishments, reporting, “Many would argue that a shooter doing this is far less impressive than, say, a gymnast or a swimmer.

The act of shooting requires fewer physical attributes, extending Olympic lifespans (the oldest Olympic medalist of all time is a shooter; Sweden’s Oscar Swahn collected six medals, all in his 60s and 70s a century ago, and Rhode has done her homework on him).

‘Gymnastics, maybe you prime out in one or two Olympics,’ said Morgan Craft, who was eliminated in the semifinals. ‘I know shooters that are 80-plus years old that still have an absolute blast and still shoot awesome scores.’

At only 37 years old, Kim will likely continue to rewrite the record books, possibly for decades to come. It is also very likely that she will continue to be made invisible by the Alphabet Network Club.

Patriotism should not be a burden.