A website has been started raising money to assassinate President-elect Donald Trump. Why no outrage, mainstream media? This is a very serious crime!

Wouldn’t raising money online to assassinate someone be considered several crimes including “conspiracy to commit murder,” “terroristic threatening,” and “inciting violence,” among other crimes?

That is exactly what is being done on the darknet. Some insane character is actually raising money to assassinate President-elect Donald Trump.

Whether a joke or a butthurt Hitlery sycophant, it isn’t funny, and the authorities must take this seriously, apprehend this individual who has been identified by a hacker, and be sure he or she doesn’t see the light of day for many years.

As reported by CSO, a website launched earlier this week on the Darknet is calling for the assassination of President-elect Donald Trump and Vice President-elect Mike Pence, due to an extreme difference in opinion on their political stance. 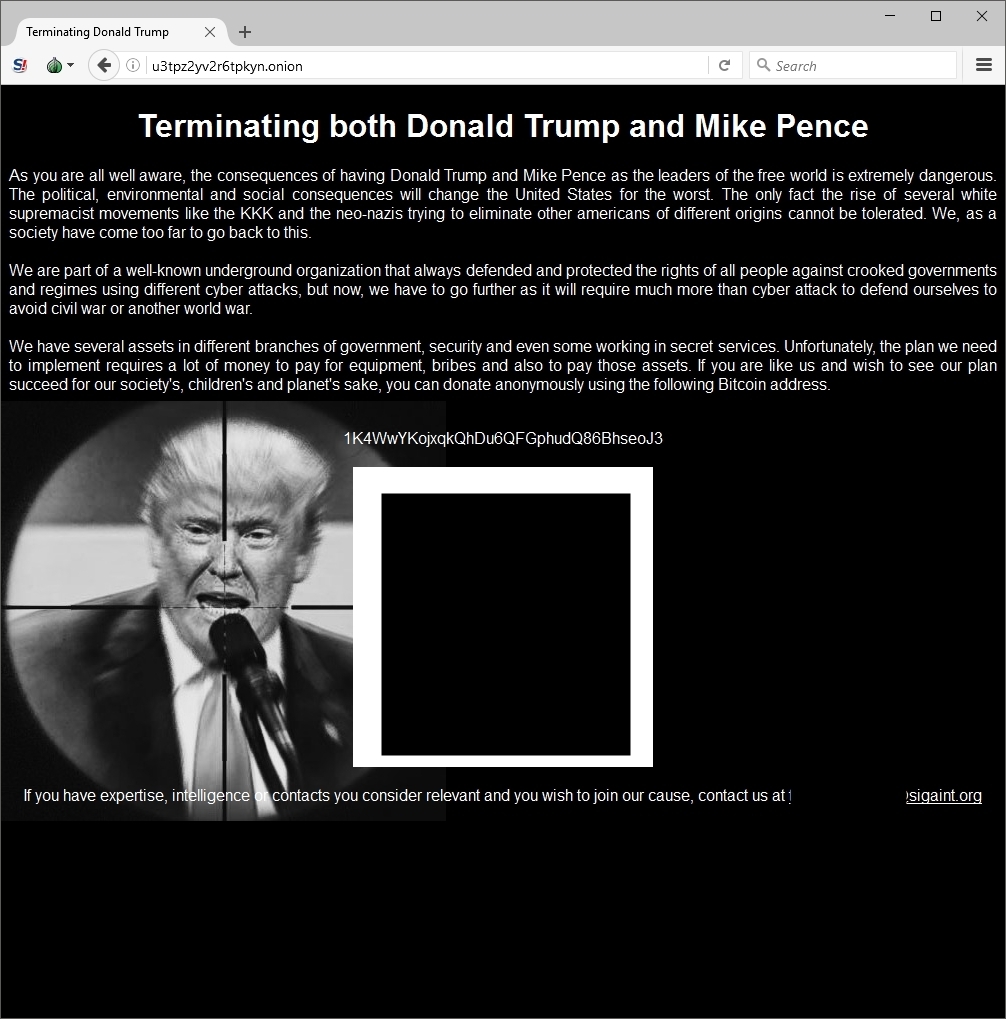 “As you are all well aware, the consequences of having Donald Trump and Mike Pence as the leaders of the free world is extremely dangerous. The political, environmental and social consequences will change the United States for the worst,” the website says.

Consisting of a single HTML file, and an image of President-elect Trump in the crosshair of a scope, the website is asking for donations in order to fund the assassination attempt.

ALSO ON CSO: The Illustrated Guide to Security

“We have several assets in different branches of government, security and even some working in secret services. Unfortunately, the plan we need to implement requires a lot of money to pay for equipment, bribes and also to pay those assets. If you are like us and wish to see our plan succeed for our society’s, children’s and planet’s sake, you can donate anonymously…”

Donations come from Bitcoin, and the advertised wallet has collected more than $88,000 since March 2016. However, since the assassination website launched this week, the wallet has only collected $119.

The incoming Trump administration has faced a severe backlash in the press and on social media, as many of those joining the administration have questionable, if not outright direct ties, to white nationalist organizations. Mike Pence is known for his dislike of anything related to the LGBTQ community.

A recent NY Mag article ran the headline stating Trump was building a team of racists. CNN has a constantly updated article tracking Trump-related hate crimes, and TIME recently published a story highlighting the rise in racist incidents since the election.

The US Secret Service is aware of this domain. Salted Hash has reached out to them for comment, and will update if more information becomes available.

It’s fine to hate the incoming Trump administration and to protest against them, as well as all they stand for – that’s our right; but you can’t call for their death, or solicit funds to help make that notion a reality. Murder isn’t a valid form of protest. A website such as this should upset non-Trump supporters as much as it would those who voted for him.

A person claiming to have hacked the assassination website has left a message in the source code. The message says they’ve altered the Bitcoin wallet in order to deny funds, and names a Canadian as the person responsible for the website’s development.

Salted Hash has reached out to the individual via Reddit, as well as the hacker via their Sigaint email address.

“He’s actually just a little scammer, but now he’s calling to murder the president-elect. I don’t see how anyone could sit back and watch someone doing that,” the message said, referring to the website’s developer.

“I actually planned to send an email to the United States Secret Service about him, but I can’t find an appropriate email address of the USSS, so I’ve to post this here. Please forward this message to the appropriate public authorities at your convenience.”

While the information was forwarded to the US Secret Service, it is highly unlikely that the person responsible for the message couldn’t locate reliable contact details on the agency’s website.

“This is an unusual case. Not only is someone purporting to raise money to commit a very high-profile crime — one that will certainly garner attention from the highest and most sophisticated levels of the U.S. government — one or more actors appear to be sending messages through the allegedly hacked source code of the Darknet site in question,” said Mark Turnage, CEO, OWL Cybersecurity.

“It’s unclear as to whether this is a third party trying to expose the site owner as a scammer, a ploy to seed confusion or something else entirely. It will be interesting to watch.”

A redacted copy of the source code is below.