The judge who granted the injunction against President Trump’s travel ban based his decision on a barefaced like, and he knows it!

Judge James Robarts, the federal judge who granted an injunction against President Trump’s temporary ban on travel from seven Muslim-majority countries, based his decision on a barefaced lie, and he either knows that, which would make him corrupt, or he didn’t know that, which would make him incompetent, neither of which is a desirable quality in an individual with the lives of people in his hands every day.

Robarts based his decision to grant the injunction on his belief that there have been no terrorist incidents by refugees from the seven banned countries, which is not true, and Robarts knows that or certainly should have known that before granting the injunction. Having not done this elementary background work is unforgivable for a sitting federal judge, in my opinion, and certainly warrants impeachment, which would be a simple matter in the House, but more difficult in the Senate where a conviction would require a 2/3 majority. If We the People scream loudly enough, it will happen.

President Trump could have ignored Robarts’ injunction, since a Massachusetts judge ruled in favor of the ban, but knowing that it would create a constitutional crisis pitting the judicial branch against the executive branch, Trump simply appealed. The case should be heard shortly in the Supreme Court and the ban upheld, as the language in our Constitution is clear, giving the President full authority to implement such a ban, as well as there being many cases of precedence from Jimmy Carter to Barack Hussein of presidents implementing travel bans from certain countries based upon national security concerns. 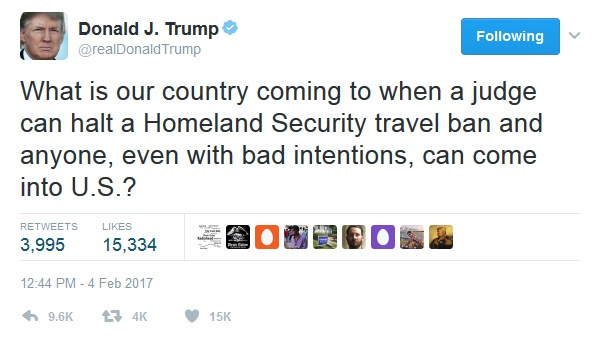 Judge James Robart, a federal district judge in Seattle, stated that no one from the seven countries on Trump’s list – Iraq, Iran, Syria, Somalia, Sudan, Yemen and Libya – has been arrested on terrorism charges since the Sept. 11, 2001, attack on America, according to WND.

His comment, made in open court on Friday, went unchallenged in the establishment media all weekend and into Monday, while WND reported it was inaccurate and gave a partial list of terror incidents that have been plotted or carried out by Somali and Iraqi immigrants since 9/11.

Where is Politifact? Where is Snopes? Where are all the other media fact-checkers to correct the mistaken judge?

“Judge Robart no doubt knows the mainstream media is a propaganda arm for the left’s globalist agenda, and so no one would report the falsity of his statement except ‘discredited’ or ‘right-wing’ news outlets,” said Robert Spencer, an Islam expert who blogs for the David Horowitz Freedom Center at JihadWatch.org.

Finally, on Monday afternoon, the Associated Press came out with a fact-check on Robart’s comment, debunking it as patently false.

“WASHINGTON — The federal judge who halted President Donald Trump’s travel ban was wrong in stating that no one from the seven countries targeted in Trump’s order has been arrested for extremism in the United States since the 2001 terrorist attacks.

Just last October, an Iraqi refugee living in Texas pleaded guilty to attempting to provide support to the Islamic State group, accused of taking tactical training and wanting to blow himself up in an act of martyrdom. In November, a Somali refugee injured 11 in a car-and-knife attack at Ohio State University, and he surely would have been arrested had he not been killed by an officer.”

CNN, the New York Times and the major TV networks were silent on the legitimacy of an exchange Friday in federal court between Robart and Justice Department lawyer Michelle Bennett, who was tasked with defending Trump’s executive order.

Robart grilled Bennett, asking if citizens of the seven countries named in the order had been arrested for plots in the U.S. since 9/11. Bennett said she didn’t know.

“The answer to that is none, best I can tell,” Robart said. “You’re here arguing on behalf of someone that says we have to protect the United States from these individuals coming from these countries, and there’s no support for that.”

But the judge answered: “I’m also asked to look and determine if the executive order is rationally based. And rationally based, to some extent, means I have to find it grounded in fact instead of fiction.”

As it turns out, Robart was the one basing his decision on a fiction.

Trump’s order bars citizens of the seven countries from entering the U.S. for 90 days, all refugees for 120 days and indefinitely halts refugees from Syria.

Robart, a George W. Bush appointee, halted the enforcement of Trump’s order nationwide pending appeals. The case has been appealed to the Ninth Circuit Court of Appeals, and is expected to make a fast track to the Supreme Court.

Robart, ruling in a lawsuit brought by the attorneys general of Washington state and Minnesota who sought to stop the order, said the states “have met their burden of demonstrating that they face immediate and irreparable injury as a result of the signing and implementation of the Executive Order.”

He said the order adversely affects residents of the two states in areas of education, employment, education and freedom to travel. Dozens of corporations such as Microsoft, Expedia, Apple, Google, E-Bay, Amazon, Starbucks and others claim to be suffering damages by the executive order. The essence of their claims is that they are suffering economically, which may be the case since these companies benefit from hiring cheap immigrant labor from Muslim countries.

Almost every president since the advent of modern air travel has implemented bans on travel from various nations for various reasons. President Obama enacted a six-month ban on refugees from Iraq in 2011 after it was revealed that two Iraqi Muslims resettled in Bowling Green, Kentucky, were sending weapons and cash to al-Qaida in Iraq. They were arrested, tried, convicted and are serving time, unbeknownst to Judge Robart.

President Jimmy Carter implemented a travel ban on citizens from Iran after the Shah was deposed and students seized the U.S. Embassy in 1979.

Dozens of Somali refugees have been involved in terror plots, including more than 40 of which left the country to join ISIS, al-Shabab or al-Qaida, the FBI has confirmed.

Andrew Luger, the U.S. attorney for Minnesota, even admitted in April 2015 that “We have a terror recruitment problem in Minnesota” involving the Somali refugee community in that state. His comment came at a press conference after six Somali refugees were charged with trying to leave the country to board flights to Turkey, from where they planned to hop across the border to Syria and join ISIS.

The problem got so bad in Minnesota with Somali refugees and their sons being recruited by ISIS that the federal government under Barack Obama approved grants for a pilot program that emphasized teaching Somali youth how not to succumb to the terrorist recruiters by getting involved in soccer or the arts.

As WND pointed out in a story Sunday and the AP acknowledged Monday, Somali refugees also carried out knife attacks against civilians at a mall in St. Cloud, Minnesota, on Sept. 17, injuring 10, and at Ohio State University on Nov. 28, injuring 11.

So Robart either has a short memory, does not read the news, or was deliberately whitewashing the facts in an attempt to strike down Trump’s executive order.

Pamela Geller, editor in chief of the Geller Report and president of American Freedom Defense Initiative, said Robart’s decision, if upheld, smacks directly at the sovereignty of the United States and strips the president of his constitutional authority to protect the nation.

“The media doesn’t care about the truth. It only cares about demonizing Trump. To report Robarts’ lie would interfere with their quest to destroy Trump, Trump’s ban, and the dawn of a new, glorious era in Trump America,” Geller told WND. “The travel ban is legal: it is clearly set out in American law that the president has the right and responsibility to bar people from entering the country for national security reasons.”

She said it is indicative of how “traitorous the left has become that they are so angry and rioting about this.

“And the judges who have blocked the ban are no better. Even those appointed by G.W. Bush represent the failed establishment that is trying desperately to hold on to its power, continue to further the cause of globalist socialist internationalism, and keep the U.S. from defending itself.”