More love and tolerance from the left. Self-proclaimed Alt-Left leader vows to “crush skulls” during “Patriot Prayer” rally in SF this weekend

Over the eight miserable years of the Barack Hussein administration, leftists were conditioned to believe that they can get away with anything they want. Looting, assault, even burning cars and buildings, anything short of murder, and that may be coming soon.

Hussein may be gone, but the Democrat Communications Bureau, aka the mainstream media, is continued the fight to allow leftists to commit any crime they choose without consequence. After all, “peace through violence,” right? That was CNN’s August 18 headline before changing it at the insistence of Antifa, which does not want to called out for committing violence of any kind for any reason.

Police should be looking for this assclown who uses the Twitter handle “Prince Jordan,” but whose real name is Jordan Towers. If he is carrying any weapon of any type, he should be arrested on the spot. However, this is San Francisco, so he will probably be given a file to sharpen the nails in the end of his bat. (Note that in the tweet pictured below, one of the addressees is Nancy Pelosi.) 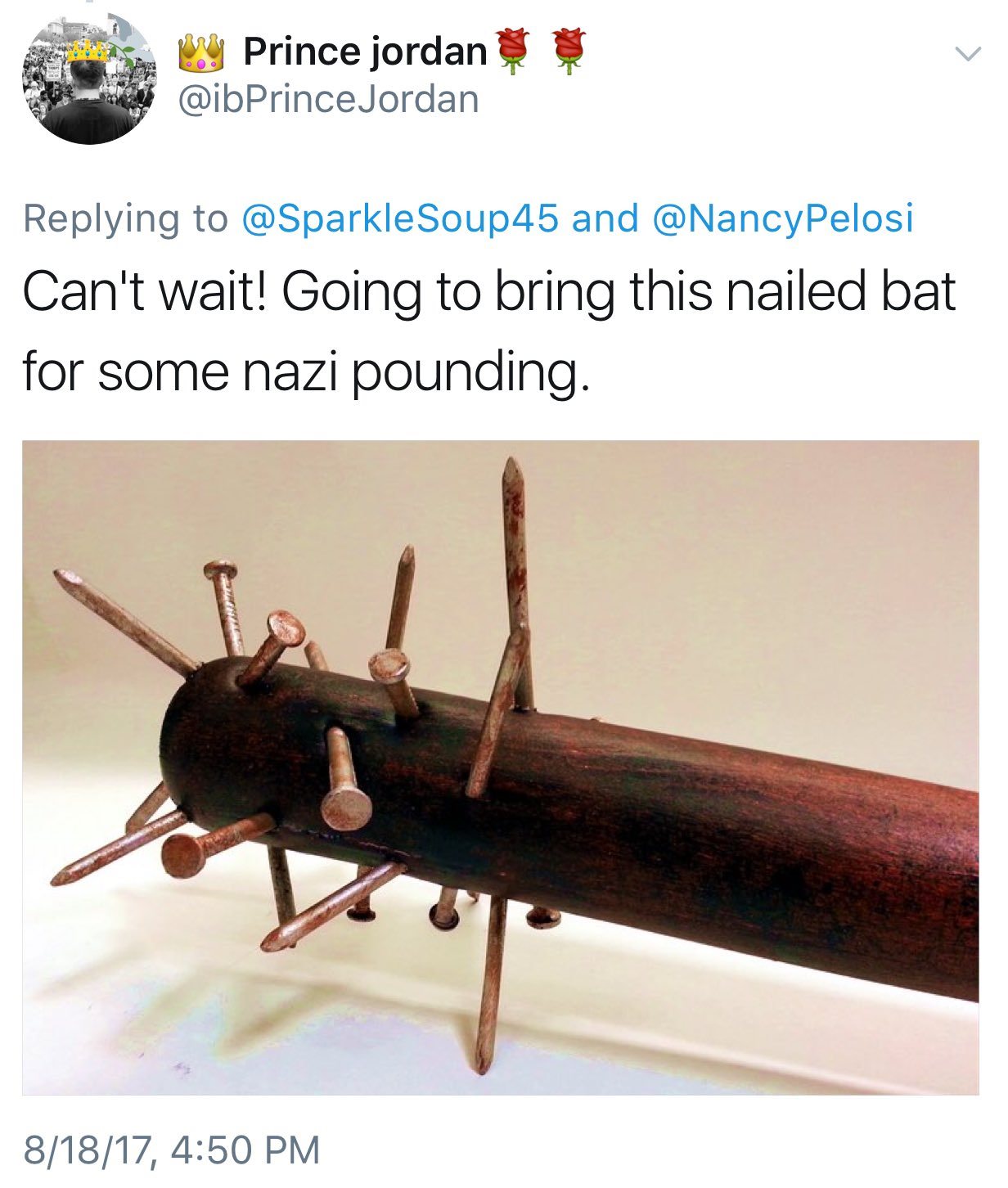 A self-proclaimed Alt-Left “leader” has vowed to use a baseball bat embedded with nails to “crush skulls” during a “Patriot Prayer” peace rally set to take place in San Francisco this weekend, reports Infowars.

The Twitter user, who goes by the handle @ibPrinceJordan, tweeted, “The Patriot Prayer rally is a nazi white supremacist event. I’ll be their to crush some nazi skulls.”

He repeated the threat in a series of other tweets that have now been deleted.

“Can’t wait! Going to bring this nailed bat for some nazi pounding,” read one.

The user is located in San Francisco, which is where the event will take place at Crissy Field on Saturday, suggesting he does indeed plan to attend the march.

Despite numerous other prominent Twitter users drawing attention to the violent threat, the account has not been suspended.

What makes the threat even more absurd is that organizers of the Patriot Prayer rally have specifically said its aim is to “promote peace, love and unity,” and that racists are not welcome.

Even the SPLC, which routinely tars conservatives with a broad brush, does not consider Patriot Prayer to be a hate group, reports Fox News.

To the alt-left, that doesn’t matter. Anyone to the right of Michael Moore is fair game for violent assault.

Remember, in the aftermath of Charlottesville, the mainstream media relentlessly attacked Trump for saying both sides were responsible for violence, tacitly endorsing the violent alt-left.

CNN even changed a headline at the request of Antifa to disguise the fact that the group routinely engages in violence.

Given that the mainstream media has emboldened unhinged thugs by exalting them as “anti-fascists,” any violence that occurs at the “Patriot Prayer” rally will be their responsibility.