Beltway parasite General John Allen is slamming Donald Trump for supporting waterboarding and saying Trump is going to start a civil war. The Donald is firing back, calling Allen a “failed general” 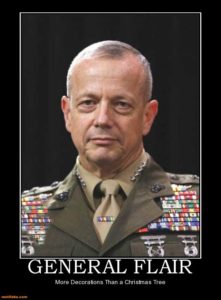 As a young Army officer I witnessed politicians masquerading as senior commanders, and it made me sick. “Beltway generals” are no better than the career parasites in government, both in elected and appointed positions, and they can be found in every branch and at every level. The more successful politicians find themselves at the top.

I don’t mean to generalize (pun intended), disparaging the whole lot of officers in our armed forces. Some are patriots and have risen to their station in the service through solely their own merit. No ass-kissing.

However, put that officer beside a “beltway officer” and you can’t tell the difference. They look alike. It is their hearts that are different. The “beltway officer” looks out for himself first, his duty to the Constitution second.

General John Allen is a “beltway general.” He has been slamming Donald Trump for approving of waterboarding as a legitimate interrogation technique. The United States military has waterboarded three prisoners total, which led to priceless intelligence and many saved American and Allied lives.

THIS is really all you need to know to determine what John Allen is all about. He was chosen by Barack Hussein to replace General Petraeus, confirming him as a political player, not a military leader. He was also chosen to speak at the Democrat National Convention, you know, where the American flag was purposely not displayed. You know, the convention of the highly ethical and patriotic politicos of the left, the party of racism, abortion, and corruption, who bow to foreign leaders and apologize for being American, who have no regard for our country, and who are proudly giving away your childrens’ futures to further their own wicked agenda.

According to Wikipedia, “Allen was a featured speaker at the 2016 Democratic National Convention in Philadelphia on July 27, 2016, on the topic of national security. He criticized Republican nominee Donald Trump and endorsed Hillary Clinton for President.[29] Trump fired back,”He [Allen]’s a failed general.”

Allen has been called out on his own email fiasco lately. It seems while a high-ranking general, he was emailing a certain married Florida socialite over 50 times a day. He epitomizes all that the Democrat Party stands for. A patriot he is not!

General John Allen and Jill Kelley. Allen sent tens of thousands of personal emails to this married Tampa socialite, who was also at the center of the Petraeus investigation, which eventually ended both generals’ careers. For a closer look at this unusual relationship, check this link…. Allen/Kelley/Petraeus

“General John Allen, Hillary Clinton’s shill for national defense is throwing stones while standing in a glass house. His attacks against Donald Trump include a tirade that a President Trump would cause a civil-military crisis.

His argument is as weak as the abysmal foreign policy performance of the Obama-Clinton team. He is the perfect general to represent their failed paradigm. Allen was in charge of U.S. counter-ISIS strategy at the time ISIS went from being “the JV Team” to being the largest purveyors of global terror in modern history.

Let’s break this down: The Obama-Clinton fight against Islamic Fascism is deficient in every theater of operation. Allen’s beef with Trump is about an interrogation technique used against terrorists called waterboarding. For all the handwringing by the left over this issue, in the end, only three terror subjects were ever subjected to this “enhanced interrogation method.” That’s right, only three known terrorists — all the while, over the last decades, the U.S. military has subjected tens of thousands of its own service members to waterboarding in preparing them for the rigors of possible enemy capture.

Trump said, as president, he would consider using waterboarding again as a method to prevent terror attacks. Perhaps it’s best to listen to both Khalid Sheik Mohammed, the mastermind of 9/11, and his lieutenant Abu Zubaydah on this issue. According to the U.S. Justice Department memo on waterboarding: “They both expressed their contempt on the will of the American people to defend themselves and that the US population was weak, lacked resilience and would be unable to do what was necessary to prevent the terrorists from succeeding in their goals.” Those terrorists made that statement having just experienced 8 years of Clinton defense policy, and clearly their ISIS comrades would welcome more Clinton weakness on the issue.

Candidate Donald Trump has rightly and consistently criticized the NATO alliance and said he would demand that its members actually pay their share of the agreed defense burden. Of the 28 NATO member nations, only 5 countries spend the Alliance agreed amount (2 percent of GPD). Wealthy Nations like Germany, Netherlands, Denmark, and UK all fail to meet the 2 percent threshold. Norway, with an $885 billion dollar Sovereign Wealth fund, still barely pays half of the recommended 2 percent amount. All this while, the U.S. taxpayer expends 3.3 percent of our national income on defense, and not only do we not have an $885 billion savings account, rather we have a $20 TRILION dollar debt.”

“While Allen was White House Coordinator of anti-ISIS efforts, the $500 million funded training program for “moderate Syrian rebels” totally failed and was abandoned due to the rebels surrendering weapons to and even joining radical Islamist forces. Allen totally failed to actually combat ISIS, nor did he rebut the repeated misguided policies of the Obama administration half measures to combat terror.

-In September of 2011, the Obama-Clinton foreign policy team killed via a drone strike a U.S. citizen Anwar al-Awlaki and his 16-year-old son born in Colorado. Certainly, the U.S. needs to kill terrorists, but this is the first time ever an American citizen was targeted for death by his government with ZERO due process — no court ruling or Senate vote stripping his citizenship (as was done with Robert E Lee of the Confederacy). The double standard of the left on this is intolerable.

-While an active duty or retired general, Allen has remained silent on the repeated social engineering experiments inflicted on the U.S. military by the Obama administration. These travesties include forcing women into combat and special operations roles, even though extensive third party studies collected for the U.S. Marine Corps show significant degradation of unit performance in combat readiness. Even worse, the army is now paying for transgender treatments for soldiers, including convicted traitor Bradley Manning (convicted for leaking 700,000 classified documents). The Army spends these funds while thousands of wounded veterans wait for months or even years needing essential medical care they have actually earned in battle. This is a real crisis and one inflicted on our uniformed services with the complicity of bureaucrat generals like Allen.

-Lastly, in keeping with his desired commander in chief, General Allen also has an email problem. After serving as commander of ISAF/US Forces in Afghanistan from 2011-2013, he was investigated for having essentially having phone sex via more than 30,000 emails with an attractive Tampa, Florida, married socialite. He retired after this scandal investigation. As odd as this is, how does one have time during 19 months of command of U.S. forces in a war zone to send 30,000 emails, an average of 52 per day? The Taliban now controls more than 35 percent of Afghanistan. This losing trend started under Allen’s Command. America needs warriors in charge of its military forces, not the breed of general represented by General John Allen. Hillary Clinton’s ascendancy to be Commander in Chief would cause the real crisis in civil-military relations and trigger an actual breach of trust by the rank and file looking for real leadership.”

Listen to Erik Prince discuss this on Breitbart News Daily on SiriusXM: